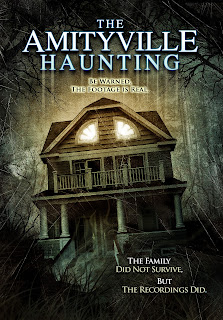 Damn it! I suppose it was a matter of time before someone thought it would be a good idea to make an Amityville flick that was also a found footage movie. As you may already know if you have been hanging out at Crappy Movie Reviews, I’m not a fan of found footage. I’ll give them props when they are done right, but in my experience that isn’t very often. Well let’s see what we have here.

The story starts off with some kids sneaking into “the house” which looks nothing like the Amityville house at all. They get up to some sexy shenanigans and then something bad happens. What is that? Who knows we just see them yanked away from their phones… because you know everyone films themselves having sex when trespassing? Next up we see a family looking to buy the house. Even after the real estate agent drops dead in the driveway they still fall in love with the place. I suppose that explains why they don’t leave when the doors keep opening by themselves, the daughter’s boyfriend ends up as a pasty pile of dried blood in the backyard, and of course they find the phone with footage of the kids from earlier. Yep, no reason to leave the house… none at all. There terrible decisions lead to the predictable bad ending.

Not to sound like a broken record but I dislike found footage movies for a couple of reasons. First it is used as an excuse to not have a proper story with a beginning, middle, and end. The excuse of “its supposed to be real” is always tossed up as the reason filmmakers making these don’t have a plot with characters. Here this is on display with a family of unlikeable characters doing insanely stupid things that make no sense. This is only made worse when they use the most annoying character, the preteen son with the camera, as our narrator. When I say narrator, he does these odd confessional style monologues to try and fill in the plot between random bits of footage. When they do try and string together some sort of cohesive narrative, they screw it up. For example, we are told that they can’t afford to move, which is why they have to stay. Only to see the father install what has to be a very expensive security system to record what is happening in the house. Sure, that makes sense.

The second issue here is that again the filmmakers lean into the found footage genre to cover up the fact that they clearly had no idea how to shoot a movie. The audio is awful, and it is hard to hear the dialogue at times. Also, like many found footage flicks the camerawork is enough to make you motion sick as the camera never sits still long enough to see what is going on. Sort of hard to make a scary movie when I can’t even see what is supposed to be spooky. This is also used to cover up the lack of budget and any special kills or effects. This is just lazy filmmaking.

This is the worst of these movies so far. I’m beginning to question the wisdom of this marathon. Hopefully they get better, but I hear things… bad things. Until next time heed my advice and don’t spend your valuable time watching The Amityville Haunting.

Posted by Gutmunchers Lives at 11:41 AM