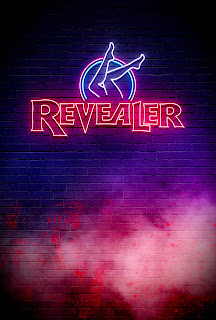 This movie caught my attention because I’ve heard great things about it, as well as horrible things. With that in mind and the fact that it was on Shudder I had to take a look at this one. What did I think? Keep reading to find out.

The fun kicks off with a television preacher locked in what appears to be a room or hallway. There is a television playing one of his sermons while a voice yells at him. He is screaming back that he isn’t a sinner. Note to self if you have to argue that vehemently that you aren’t a sinner you probably are. The credits roll and then we meet our main characters.

Angie works as a stripper at Revealer, a peep show. We see her walking into work and thru a batch of protestors where we meet our other main character, Sally. She is your typical Jesus freak who is trying to “save” everyone from themselves. Angie goes inside and sets her booth up when a weird storm rolls in. The guy running the shop, Ray, gets yanked out the door when he kicks out some of the protesters who have come in to take cover. When next we see him, he is the worse for wear as his tongue has been ripped out. Angie can’t get out of the booth because the door is stuck. Never fear though as the only other survivor is Sally who reluctantly helps. The rest of the movie is them bickering until they find a common ground, all while trying to escape what is happening.

I liked Revealer a lot. This is a very small movie with few locations and just a few characters. Most of the action revolves around Angie and Sally and the actresses portraying them do a wonderful job. They come across as real people and while you can see these opposites eventually becoming friends because of the performances it feels real. The only other actor that has any lines of note is Ray and he is there to show that outside is very bad. 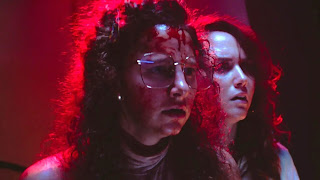 The plot is solid and paced well. Clocking in at an hour and twenty-five or so minutes not a single scene is wasted or felt like padding. The characters are always moving forward, whether it is sorting out how to get Angie out of the booth or realizing they need to get to the tunnels beneath the shop to make their escape safe from the disaster happening outside. Now I must warn you that the next bit is going to give some spoilers so if you don’t like that sort of thing, I’ll let you know that I’m going to highly recommend Revealer. Okay you have been warned.

In the early stages of the story Sally is very annoying about this being the end times and that the rapture has happened. But as things progress, I was surprised that is exactly what is happening. Though the rules about who is in and who isn’t aren’t what Sally thought they would be. Angie points out that she is right there with her. This leads to a plot twist that I didn’t see coming and was interesting. All while this is happening, they are being chased thru the tunnels by the demon of lust, which I suppose makes sense given where Angie worked. This makes for an exciting and interesting watch.

There isn’t much gore with Ray being the only person who gets messed up and the worst of it is offscreen. What I did like was the design of the demon as well as the look of both the club but the tunnels as well. Oh and we find out once they are down there that this is where the preacher was in the precredit bit. How is that possible? Okay there is a super spoiler coming… the camera pulls back at the very end after we thought they had reached safety only to see in a post credit scene (stick around!) that they are already in hell. Wow… I did not see that coming. Way to go movie.

I don’t get why there is so much hate for Revealer, but I don’t agree with it. Maybe people were turned off by the small cast or maybe they didn’t see the post credit bit. Either way I’m going to recommend that everyone check it out. This is a great movie and another big score for Shudder.