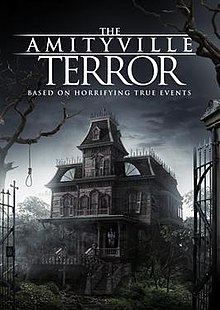 They keep making these Amityville knock off flicks and I keep watching them. This time around the movie kicks off with a man and woman trying to flee a house while things fly all around them. The lady stops when a little boy calls her Mommy and beckons her back. She goes, the door slams, and she is toast. The next scene is us being introduced to our main characters. This consists of a man, his wife, their teenage daughter, and the man’s sister who is just out of rehab. Apparently, she is a drunk.

Weird stuff happens not long after moving in. This includes a real estate agent who may know more about things then she is admitting too, some brother sister action that seems to be a must for these Amityville movies, some teenage bullying, and a local girl named Jenny who tries to help. FYI Jenny gets tossed out the window for her troubles. What is happening? Are the locals in on it? Will anyone survive? How many times will the real estate lady get naked? You will just have to watch this one to find out.

The Amityville Terror wasn’t horrible compared to most of the previous entries. Though let’s be honest that isn’t a high bar to clear. The story is familiar, but the pacing is decent. This movie clocks in at a decently tight eighty-four minutes. After that seemingly unrelated family from the opening the story wastes no time establishing the characters and defining their relationship to each other. There is also a bit of a mystery when it seems that some folks, like the man’s boss and Jenny act as if something is up. I suppose a spoiler warning is in order. See the real estate lady is evil and she is renting the house to people knowing that they will be killed there. For some reason many of the other locals are aware and, in some cases, seemingly in on it. 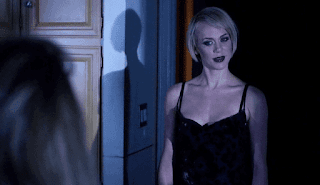 The above leads to some bloody mayhem including some guts, a beheading, some crossbow shenanigans, and other fun tidbits. Some of the effects are cringeworthy CGI but others are pulled off okay for a lower budget movie. The idea of feeding the house isn’t new to the franchise but I think that it is neat how they allow the story to leave the location. Instead of being trapped our main character, the daughter Hailey, gets to pop around town getting her Nancy Drew on! That also helps with the pacing.

If this was just a movie and wasn’t part of the Amityville series (such as it is…) I don’t think that I’d recommend The Amityville Terror. But this review and movie aren’t in a vacuum, so I’d be remiss in not considering that. If you are determined to watch one of these later Amityville movies, then you could do a whole lot worse than this one. With that sort of mediocre recommendation, I’m off to watch another entry. They have to stop making these… right? God I hope so.

Posted by Gutmunchers Lives at 10:40 AM