Let us end the Bigfoot marathon fun with another movie I found on Amazon Prime. Here we have a group of kids headed off to a cabin in the woods for Spring Break. Seriously when has that ever worked out well? I watch enough horror movies that I’m never going anywhere for Spring Break! Though I really am too old for that anyway so no big loss. After running into an obnoxious shop 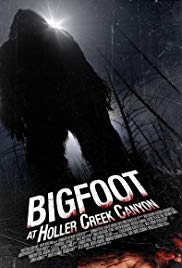 owner, some shoplifting kids, and a redneck who really enjoys eyeshadow they make it to the cabin. After a party/acting like a dumbass montage we get a couple of things. First up they get naked and have sex… in the woods. Again, have they never seen a horror movie? Oh, and something is watching them. I mean other than the shop owner who is being a creeper with a video camera. Eventually we find out that there is a Bigfoot in the woods and that it has decided to start killing people. The locals all end up dead and then it starts on the kids. We eventually get down to our survivor girl who kills the monster. Or does she? Really? Of course she didn’t kill it. Have you ever seen a horror movie?

I’m having some fun with the plot synopsis mostly because I had fun with the movie. Holler Creek Canyon knows exactly what it is and doesn’t shy away from that. We get pretty people going into the woods, meeting up with scary locals who are just a bit creepy. They make some bad decisions and pair off for some naughty activities. Much skin is shown, both male and female, and then the creature shows up. From that point on we get blood spraying, heads squished, guts torn out, and legs shredded off at the knee. But the best is a callback to Night of the Demon, which I’ve already covered for this marathon. Yes, ladies and gentlemen there is some violence towards the wang, though unlike Night of the Demon it is off screen.

A couple other things of note here. I thought they were doing some stunt casting when I saw Ron Jeremy’s name on the poster. But instead of the normal cameo he has an actual part here with several scenes and is rather funny. He plays the greasy shop owner who spies on the kids, waves his gun around (and I mean an actual pistol…), and eventually goes out into the woods to kill the rogue bear blamed for all the killings. Spoiler he does get the bear but that wasn’t what was killing all the critters in town. He has some snappy dialogue and lands most of the best jokes.

The other thing that surprised me was the special effects work. We don’t get to see the gore happen but do get some shots of mangled bodies after the fact. That was a little disappointing, but they do make up for it a bit with how cool the bodies look. Where they did a great job was with the Bigfoot costume. It is all practical and looks much better than I would have thought. They keep it in the shadows for most of the movie but when you get a glimpse it looks like a real creature. The actor can move in it and is able to chase the cast and be menacing.

I do have a couple of complaints, though they are minor. We get a few montage/dialogue scenes that drag the pacing down a bit. The movie is around ninety minutes long and could have done with about ten minutes of it cut. I also didn’t like the tacked on ending which felt forced. But overall this is a decent movie that surprised the heck out of me. I can’t believe it took me fourteen years to watch it! I recommend Holler Creek Canyon.