The Bigfoot marathon stomps along with this late-night show/drive-in staple from the mid-seventies and in the same vein of “documentaries” Legend of Boggy Creek or the classic Ivan Marx flick The Legend of Bigfoot. Of course, if you watch them now it is clear that their logic was faulty and most of the evidence has been debunked. Then again who cares? It might be the nostalgia talking but I find all of them very entertaining and The Mysterious Monsters is one of the best. 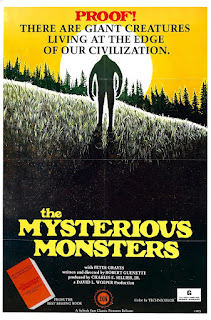 This documentary from Schick Sunn, also known as Bigfoot the Mysterious Monster, was a favorite of mine growing up. Peter Graves narrates and appears on camera talking to experts and eyewitnesses who do their best to prove that Bigfoot is real. They also have some reenactments of those “actual” encounters to spice things up. From a high school girl and her father terrorized by a Squatch on the road to a couple coming face to face with one at their door we get plenty of creepy moments on screen. And just because they wanted to earn the title that includes the plural of monster, we also spend a few minutes on Bigfoot’s cousin the Abominable Snowman as well as another famous cryptid The Loch Ness Monster!

The seventies was a decade that fell in love with Bigfoot. Not only did you get several documentaries like this about the big fella, but it also helped launch the greatest of all television shows In Search of with Leonard Nimoy. Speaking of television, we even got an alternate robotic servant version of Sasquatch on the Six Million Dollar Man. He was really everywhere. I’ve always felt that The Mysterious Monsters was the best or at least a close second to the previously mentioned Legend of Boggy Creek (which I also love and covered for the marathon). There are two things that make this one a lot of fun. The first is Peter Graves as the narrator and host. I don’t know if he was into Bigfoot or if he was having fun, but he takes the subject deadly serious. He asks questions and nods appreciatively as the various experts answer them. His narration is dramatic and helps to setup the different reenactments that are shown. Altogether it works really well.

The other way that the movie sets itself apart is the costumes used to bring the Bigfoot to the screen. A lot of these movies were shot quickly and basically used a slightly modified gorilla costume, which kind of ruins things. The fact that they try and make it look as good as possible not only allows them to show more of the creature in the reenactments, but also helps to continue the serious tone. If it looked silly on screen, then it wouldn’t matter how well Graves sets things up. But the filmmakers made the effort and it helps the movie a lot.

I want to make one thing clear. The Mysterious Monsters isn’t a serious look at Bigfoot and like the other documentaries made for the drive-in circuit was a cash grab. But they did a wonderful job making it and playing to the audience that wanted to believe which included a very young me! While I grew up and can see how silly the idea of Bigfoot is now, I still enjoy the heck out of this movie and had to include it in the Bigfoot marathon. This is a must watch for anyone interested in the drive-in, the seventies, or cryptozoology. I highly recommend it.

note: The video linked above isn't a trailer but instead is the the movie itself. Enjoy!

Posted by Gutmunchers Lives at 3:07 PM