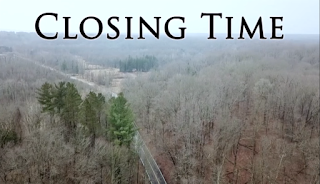 This is another pickup from this past weekend’s Grossfest. Jim Roberts is a filmmaker whom I’ve been following since his first feature Welcome to Deer Creek. I was more than a bit pleased to see his new movie was available at the show and even came with a special numbered Grossfest cover.

Things start off with the aftermath of a car accident. We watch as a coroner fills out his report that an older gentleman passed away due to his injuries. That man was Eddy’s father and he doesn’t believe for one second that it was an accident. With the help of some henchmen and a chainsaw they go looking for answers! I probably should mention that Eddy and his father were members of what I like to call the cowboy mafia. They are all decked out in boots, hats, and bolo ties, which is awesome. This also means that Eddie was the wrong guy to piss off.

Eventually they figure out that the son of a man who owes them money drives a car just like one that was seen fleeing the scene of the accident. The son is named Steve and his family runs a country western outfitters store. Eddy and the crew decide to hit the place at closing when the family will all be together to get some revenge. This works really well because of a large snowstorm that traps them in the store with the angry gang, so no one is leaving. I might also mention that the store was built on the site of a massacre of Indians and is haunted by the ghosts of the victims and the Indian shaman who cursed the land. Damn it this movie has everything!

There is a lot going on in Closing Time and they manage all of this in a tight seventy-six minutes. There is always something interesting going on in a Jim Roberts movie, especially at this stage in his career. The guy knows how to make a flick that is exciting and engaging. I was really into the story and the characters. So much so that I got sort of pissed off with the fate of a couple of them! Really dude did that many people have to die and so horribly? The fact that I cared who lived and died says a lot about the writing and acting. This is a well-made, written, and acted movie. That is a credit to Roberts and the cast he has put together.

Speaking of dying horribly one of the hallmarks of a Jim Roberts flick is the gore and Closing Time is no different. I’d honestly put his gore up against any other independent low budget filmmaker. No one is doing the quality nor quantity of work that we get here. Post mayhem we get to see the bloody results of a jaw being ripped off, eyes being mutilated, and one unfortunate fella taking a “head” shot complete with an appliance to sell the gag. On screen we have couple throat slashes, a stabbing, bullet hits, and all sorts of other fun. I didn’t notice a single bit of CGI in the whole bloody mess! No one is putting that much effort into practical work anymore and that alone makes me love Closing Time.

I could continue with the clever use of limited locations and how Roberts managed to have the same cast members portray multiple parts without it being at all noticeable (I only realized this while watching the credits) but that would be beating on a dead horse. This is a really good movie with so much going for it and one that I highly recommend. If you get the chance to check out Closing Time or really any of his other movies, please do so. You won’t be disappointed.