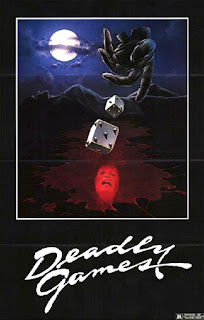 I’m digging really deep for this summer’s marathon. I had never heard of Deadly Games, or at least I don’t remember it. But it looked as if it was a Slasher movie with a crazy cast including Dick Butkus and Steve Railsback. I had to take a look at this one.

Things kick off nicely with a young woman returning home at night. She slips out of her clothes, because that is a thing, and immediately gets an obscene phone call. Someone dressed all in black is spying on her and eventually breaks into the house chasing her around. It all ends poorly when the woman, whom we later find out was named Linda, goes out the window. We then get to meet her younger sister Keegan. She is there to take care of her sister’s house and property.

From here on out the movie follows Keegan and the detective working her sister’s murder, Roger, as well as Roger’s weirdo friend Billy. We get to see them hanging out at parties and going to the park to play football. Keegan and Roger get close, but eventually everything gets confused when the killer shows back up and starts to kill the women in Roger’s social circle! Who is the killer and why? And what the Hell is up with that ending? Seriously if you watch the movie, I bet you’ll be as confused as I am!

Well I’m not going to do the spoiler thing with Deadly Games so I can’t say much more. The movie is decent enough to watch once and the mystery of the killer’s identity is the main reason to sit thru it. The movie is less of a Slasher and more of a murder mystery. The kills are unevenly paced as most happen in the last twenty minutes of the movie. After Linda gets killed the movie goes on for almost an hour before anyone else joins her in her dirt nap! What we get before that is a lot of character development and potential suspects. The movie does a good job of tossing a many motives at the audience so that we are kept guessing. But if were expecting a huge body count then I have to warn you that Deadly Games will be disappointing.

Speaking of the kills I also have to let you know that these are very tame. You get a strangulation, death by drowning, burial while alive, and a normal old gunshot. The release date of this movie put it a couple of years into the Slasher cycle, so I found it odd that the effects work was so lacking. But then I did some research and realized that the movie was made in nineteen seventy-nine and released three years later. This means it was shot before the gore really kicked in. There were a lot of movies that got released and packaged as a Slasher flick when that isn’t what they really were. I have a distinct feeling that this was one of those that sat on a shelf until someone put together a nice poster and tossed it in theaters.

I didn’t hate this movie it just wasn’t what was sold to me. I even thought about not putting it in the Slasher marathon. But I figured since you the reader might find it and fall for the poster and tagline that I should keep it here as a warning. Again, not a horrible movie but be aware this isn’t what you might think it is.

edit: I couldn't find a trailer but the entire movie is on YouTube and linked above.

Posted by Gutmunchers Lives at 3:42 PM