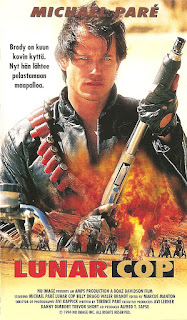 Man can’t live only horror alone. Sometimes he needs to mix some cheesy science fiction in too! I think Lunar Cop would count as cheesy sci-fi. If that isn’t enough for you we also get everyone’s favorite eighties action hero Michael Pare (Philadelphia Experiment) as our lead character Joe. I had to check this one out.

Joe is a lunar cop who is sent to Earth to get a special formula away from the extremists that stole it. The people who live on the moon fled Earth when the atmosphere was destroyed and have figured out a way to repair it. But this fix was stolen by terrorist humans from Earth for some nefarious purposes. Before our hero can even find the stuff, he gets caught up with a biker gang that is terrorizing a peaceful village. Unlike what he was told not everyone left on Earth is a savage, so he feels obligated to protect them. Along the way he finds out a couple secrets, does battle with the gang, and finally gets a showdown with a robotic killing machine Terminator style!

This is a weird flick. There were times that I thought I wasn’t liking it but then other times that I was. Let me try and explain. We start off on the Moon and I thought that it was going to be a sci-fi story. That was okay. But then Pare is suddenly riding a dirt bike in the desert as he searches for the stuff that was stolen. He meets up with a beautiful woman named Thora and fights it out with the biker gang. So, then we get a movie that is all about him saving the village and protecting his lady love. They set traps have the big showdown etc. That was sort of fun. But then after that story is resolved the robot shows up and we get him fighting the killing machine that spouts off lines like “resistance is futile” and “prepare to be terminated”. This might be the weirdest and most entertaining bit of the movie.

This plot jumping around makes for an uneven movie that has several slow spots. I get that a low budget nineties movie like Lunar Cop had to try and appeal to as many people as possible, but that doesn’t mean switching the kind of story you are telling on the fly. You could have made a really cool Joe protecting the village movie. The leader of the gang is played by Billy Drago, so you had a great villain right there. This is especially frustrating because he doesn’t get enough to do with the disjointed story. Even his death is disappointing. Though the terminator rip-off bit at the end was a decent consolation prize.

The effects work for Lunar Cop are about what one should expect from a low budget movie from this time. We get some neat explosions and lots of dirt bikes jumping over and riding thru stuff. I thought the action set pieces are really well done. The beginning of the movie where Joe is still on the moon is also decent looking, though this is the slowest part of the story. Not sure if they were able to reuse sets or something. I certainly hope they didn’t spend a lot of money for sets that barely get any screen time. The “battle damage” robotic killing machine at the end of the movie is poorly done which takes away from the fun somewhat. Not sure what else I can say.

I had some fun with Lunar Cop. It made me nostalgic for bad action sci-fi movies I used to watch back in the day. But there are big issues here and better movies you can spend your time on. Damn it I just wanted more Billy Drago! Unless you have to see every Michael Pare movie, I’d skip Lunar Cop.