Eventually I had to cover this one for one of the Slasher marathons. To me Slumber Party Massacre is one of the quintessential second tier movies in the early stages of the Slasher craze. It understands the formula and gives the audience what it expects and does it with a very low budget. Before I get too far ahead of myself let’s talk about the plot. 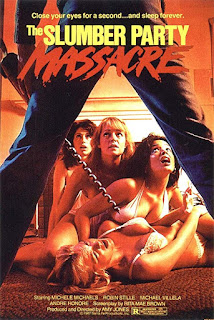 The movie starts off with a pretty girl taking off her top… check goes next to the nudity box. While getting dressed we hear a radio report about a mass murderer named Russ Thorn who has just escaped jail or maybe a mental hospital. The girl goes to school and we meet the other characters. Along the way we see a pretty phone repair lady get killed by a guy who was hiding in her van. If you are thinking ‘I wonder if that was Russ Thorn’ you are correct! He follows the pretty girl to her house and after a slumber party with more nudity starts, he goes on his killing spree.

All of the above clocks in at a tight hour and sixteen minutes. Honestly there isn’t a single wasted scene in this movie. Every second of screen time is either used to rapidly get to the slumber party, show us a murder, or have a girl get naked. Okay let me stop here for a second. I understand how creepy it is for me to keep mentioning the nudity in the movie. But this is a Slasher movie and if we are going to be honest naked girls and gore is what sold these to the audience. I guess in a “Me Too” world that might not be very PC, but it is what it is. And the filmmakers know that and give the audience what they expect. I appreciate that. Honestly if that offends you why the hell would you be reading a series of Slasher movie reviews?

We have to talk about the killer in Slumber Party Massacre. From the very start we know who the killer is and actually get to see him in the utility van early on. Normally the lack of mystery would bug me, but not so much here. Showing us the killer lets them focus on his look and the actor’s, Michael Villella, performance. He does a great job in the role bugging his eyes out and looking creepy. They also give the killer a fantastic weapon in the large utility drill that he carries around and dispatches characters with. It really is too bad that they screwed (hah I made a funny…) up the sequels so badly because this could have been just as iconic as a chainsaw or machete.

I’ve already covered how efficient the story is and how it gets to the good stuff right away, including the gore. But now I need to get more specific about the effects work. I’ve heard many fans complaining about how much happens off screen in Slumber Party Massacre, and that is a valid point.

I do think that the movie misses several opportunities to toss in a gag here and there that could have been legendary. But overall, we get a respectable body count of eleven. The highlights are a pizza guy with no eyes, a couple brutal stabbings, a throat slash, and some good work done with a machete. While we could have had more it isn’t like they ignored the gore. The fact that this was a low budget affair and quickly shot flick is the likely culprit for the lack of explicit gore on screen.

While solidly in the “B” level of slashers Slumber Party Massacre is one of the best in that tier. If you are looking for a Slasher that will scratch that itch and don’t want to watch one of the classics this is the movie for you. I recommend it.

Posted by Gutmunchers Lives at 8:36 AM