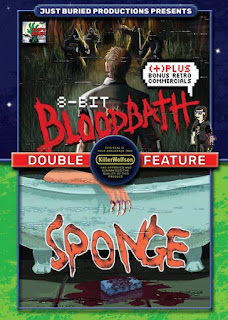 This is a little different from what I normally post here at the site as I normally just cover feature length movies. While at Grossfest this past weekend I met filmmaker Todd Wolfson and he handed me a copy of his short films 8-Bit Blood Bath and Sponge. I haven’t avoided doing short films on purpose, I just haven’t gotten my hands on any that interested me. Or at least until now that has been the case.

First up is 8-Bit Blood Bath. This one clocks in at a brisk twenty-one minutes and is the longer of the two. Things kick off with Billy playing some Nintendo when the phone rings. He is invited to a Halloween party, but when he arrives it is a trap. Some cultists have decided to sacrifice him in a ritual. Either because of the ritual or out of revenge he returns as Billy Blitzkrieg, a demon out to kill everyone he comes across! The rest of the movie is a series of random kills and his brother (I think?) tracking down and putting an end to things.

This one has all of the typical issues that I expect in an ultra-low budget movie. The acting is bad at times, the editing is awkward in spots, and you get a lot of wind noise on the mics when shooting outside. These are all things that I expect when watching a short film like 8-Bit Blood Bath. You need to realize that not everyone goes to school to learn to make movies. For a lot of filmmakers, including some who did actually go to school, this is where they learn their craft. I only mention this because viewers new to the independent scene might get tripped up by the problems and turn it off. That would be a shame because there is some good stuff here.

I was impressed with the creativity and effort put into the making of this one. I’m tired of seeing people making movies that are bad copies of the movies we all like as fans. Have your own idea before picking up the camera! 8-Bit Blood Bath is a unique and far different take on the genre. Sure, we have all seen demon possession movies and/or body count flicks in the past, but the video game hook isn’t anything that I’ve seen before. I appreciate that.

While a simple concept Wolfson and crew go out of their way to establish the character of Billy and his love of 8-Bit video games. They do this by having the character playing a Thing based video game in the style of the old Nintendo side scrollers complete with some simulated game footage done with a bit of slick animation. This is referred to later when the demonic Billy Blitzkrieg chooses his weapons as he dispatches his victims. The animated effects used for the game and the inserts was very cool and shows the level of work they were willing to put in. That is another huge positive.

I know I mentioned the editing as an issue earlier, but that was more the transitions between the scenes. The way the movie is assembled isn’t a problem at all. In fact, this is where I might be most impressed with Wolfson. You would think that it is nearly impossible to make a boring twenty-minute-long movie, but I can assure you that it isn’t. I can honestly say that there isn’t a wasted scene in 8-Bit Blood Bath. Everything is either moving the story along or setting up a kill. Far too many filmmakers fall into the trap of loving everything they shoot and refusing to cut stuff out for pacing. I don’t know if he was very efficient in what he shot or if he wasn’t shy about cutting it, either way it is a great job.

The other short on the disc was Sponge. This one is only five minutes long and is shot like a trailer for an old movie. Jerry is a door to door salesman who has failed at his job. That is until he finds a batch of sponges in the trash. They sell well but are also aliens here to conquer the Earth and eat the locals! They totally nailed the feel and look of an old horror movie with this. The creatures look silly, which is appropriate for what they are making. And again, I found this to be very creative and well put together. This was a nice added bonus to the DVD.

I’m very much looking forward to the next movie from Just Buried Productions and director Todd Wolfson. I believe he said they were working or finishing up their first feature and if what I’ve seen here is any indication it will be worth checking out. You can check them out on Facebook at https://www.facebook.com/JUSTBURIEDPRODUCTIONS/.