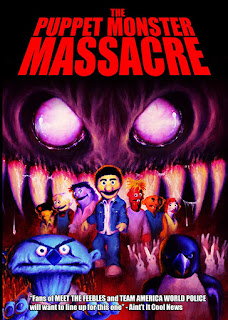 This is another pickup from Grossfest. This homage to the horror flicks of the eighties is told exclusively with puppets! Who else but an independent filmmaker is going to even attempt such a thing?

The movie is set in nineteen eighty-five, smack dab in the middle of the greatest decade for horror and follows the villainous Wolfgang Wagner. He is a former Nazi scientist that is looking to get some revenge on the men who killed his wife and destroyed his work. He moves to a small town with a monster and a plan to kill the families of those who wronged him, starting with the teenagers! He brings them to his isolated house with the promise of getting a million-dollar inheritance and unleashes the beast on them, picking them off one at a time. Lucky for our hero, Charlie, his grandfather is still a badass and has friends.

Holy Shit this is a weird one and I loved it! An entire movie where all of our characters are puppets has been done before, even with more adult themes. Meet the Feebles comes to mind as the most obvious example. But to blend a horror movie together with a rude foul-mouthed puppet flick is absolute genius! The concept gets around so many pitfalls that trip up other low budget filmmakers. I’m going to give you a couple examples of what I mean below.

First you don’t need to worry so much about your actors. There are voice actors, but they can dub their lines after the fact. You don’t need to worry about performances because there really aren’t any. Don’t get me wrong those responsible for the voices did a great job and were really good, but it just isn’t the same as having to deliver dialogue and perform onscreen. Why hasn’t this been done before in low budget horror? Director/writer Dustin Mills hit this one out of the park.

Another thing that can become an issue for an independent movie are the special effects and gore. We get a good amount of mayhem in this movie with much violence done to our cast of characters. Beheadings happen, faces get ripped off, chests are skewered, and we even have the monster born “Alien” style. Speaking of the monster the design definitely has an Alien vibe to it and is a blast. Both the creature design and gore have a much lower standard because of this being a puppet flick. But that isn’t used as an excuse to skimp on the blood and guts… even if it is made of cloth. Overall I found The Puppet Monster Massacre to be utterly satisfying to my inner gore hound.

Since I just mentioned the dialogue above, I wanted to make sure to note how funny The Puppet Monster Massacre is. The script is filled with great one liners and Gramps has great stories. This is an extremely quotable movie, but I’m going to avoid doing so here. Don’t want to spoil anything in the review. It is noticeable when a filmmaker puts effort into their script, and it makes for an entertaining movie watching experience.

I cannot wait to show this movie to my friends. I’ve already planned a movie night where I’m going to spring it on them. I’m positive that they are going to love it just as much as I do. I can see us quoting the movie back and forth for years to come. This was the first movie in director Mills’ career and I simply can’t wait to check out more from him. I highly recommend this one.

Posted by Gutmunchers Lives at 9:09 AM