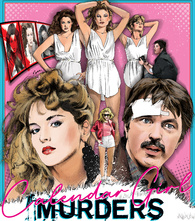 Well, this is a strange one. In my effort to track down movies for my mystery review marathon I have stumbled on some odd flicks, but none quite like Calendar Girl Murders. This made for television flick stars some familiar faces and is a weird combination of police procedural and detective story.

Our story starts off with the police, including our main character Stoner, being assigned to augment security at a big party being live on television celebrating the ladies who I guess posed for a nudie magazine. Here though they keep calling them Calendar Girls… but it is a magazine. Regardless while the show is on Miss January gets tossed off a balcony. So the police are on the case trying to figure out who killed her and why. When Miss February is stabbed to death and Miss March almost dies in a pool they know that there is a crazy on the loose. Though this gets confusing when their primary suspect, a stalker in a panel van, gets killed in the hospital things take a turn. A sinister turn where we find out that there is an unexpected twist to the story. Though fear not Stoner and his amazing dad sweater will solve the mystery.

Imagine someone deciding to make a slasher movie about a killer knocking off a bunch of centerfold models knowing that they were making it for network television so they couldn’t have any nudity or gore. That seems like a difficult task, one that I can honestly report they weren’t up to. The story has a twist that is a bit gross if you think about it and one that I didn’t see coming. Though the killer is fairly obvious early on and the twist just has to do with her motive. Oh yeah I suppose spoilers are coming so be warned. A very young Sharon Stone plays a traumatized who was victimized by the stalker and who when the other girls start to die steps up and fills in.

The thing is that the supposed stalker was a blackmailer who found out she was the daughter of the publisher, who had no idea, and threatened to expose her. That made her snap and start taking out the girls that replaced her when her father found out who she was. Which makes the fact that he was going to then let her pose anyway just a bit creepy. Again, this is only kind of a spoiler because five minutes after she appears onscreen you know she is the killer. The story is so obvious and while it tries to give us red herrings they don’t fly. There is just not any mystery here and that makes for a tedious experience.

There is a decent eighties vibe to Calendar Girl Murders that I was having fun with. Some of the music, clothes, and hair had me laughing. I swear to God as a child of that decade I still do not understand the point of leg warmers. There is also a dance sequence that must be seen to be believed. The cast is filled with some fun actors including the previously mentioned Sharon Stone we also get Tom Skerritt as Stoner, Robert Culp as the publisher, Claudia Christian as one of the models, and Robert Beltran as a cop. Though my favorite is Alan Thicke as the creepy photographer who keeps telling the girls to work the camera. Hell, Rip Torn shows up for a hot minute to tell a couple bad jokes.

I can’t say this is a good movie. The pacing is slow and isn’t helped by the painfully obvious identity of the killer. There is zero suspense here. At best I can say this is an oddity which may appeal to some viewers but not most. I can’t recommend it.

Posted by Gutmunchers Lives at 10:42 AM