Every few months I like to scroll thru the offerings of the various streaming services I have access to looking for a horror movie that I’ve not seen or heard about before. Sometimes I strike gold and sometimes I’m miserable. Camp Cold Brook is neither of those. 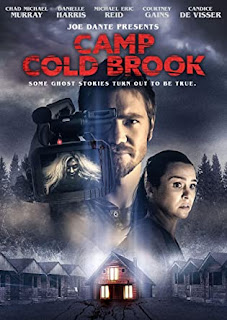 Jack runs a paranormal “reality” show called Haunt Squad. The fun starts off with the show getting cancelled by a network executive, played by Courtney Gains in a very brief appearance. Jack promises something big and manages to get one more ninety-minute special out of the network. Later we see him with his production crew trying to figure out where they should go. Yeah, he didn’t have anything planned. After an assistant brings up the massacre at Camp Cold Brook, they decide that is the ticket and head off. But not before we get some family time with Jack and his girls before the travel montage and generic nineties style rock music.

The locals in the small town try to warn them off, but a few bucks tossed at the sheriff has them being dropped off at the remote campground. They wander around a bit, have a campfire, some spooky stuff goes on, and they keep splitting up. Late in the movie we get another character, Jack’s mom, who calls and finds out where he is. Seems that Jack was one of a pair of survivors from the original massacre and there is some weird connection going on. Also we get a witch and some kid ghosts that are trapped because of a magic circle which they try to use tape to cover up. It all wraps up with an ending that I saw coming a mile away.

This is one of those movies where the scriptwriter has seen a bunch of movies and jams all the "cool stuff" into his story. We get ghosts, a witch, a team of ghost hunters, some found footage scenes, and a bit mystery/twist. Now as a fan of slasher movies, which are very formulaic, I don’t expect everything that I watch to be unique and different. As long as it is executed well, I’m good with turning off my brain and having some fun. The problem with Camp Cold Creek is that the movie is very slow and tedious. The pacing suffers from the first half hour being taken up with a staff meeting and meeting Jack’s family. I suppose the fact that he has two daughters and loves them was supposed to be the big payoff at the end. But in reality, the movie spends way too long here. It feels less like plot setup and more like padding.

We also get a travel montage, a setup montage, and what feels a bit like an improvised scene of them sitting around a campfire shooting the breeze before anything spooky happens. When we do get to the ghosts it is underwhelming. The shadows in the background and occasional face behind the glass just doesn’t do it for me. I’ve seen this done before and much better. The music doesn’t help as it tends to just run in the background without being used to set the scene or build tension. Overall Camp Cold Creek was tedious and a chore to get thru. Once we get to the end the big twist is that Jack was at the camp as a kid and didn’t remember he escaped. Nor does he remember that the girl he hired who suggested the location was his camp girlfriend. Why doesn’t he remember? Never explained. Why does his mom never tell her son with a ghost hunting show never to go to Camp Cold Creek? Again nothing? Why does his daughter’s imaginary dream ghost show up who is also the witch show up to babysit his kids and nobody says anything?

Are you beginning to get it yet? This is a very poorly written movie with lots of plot holes. It gets annoying after a while and since I wasn’t terribly interested in the story I then began to notice things like daylight shining thru windows when it is supposed to be night. Or how the camp that has been abandoned for almost thirty years has nicely mowed grass. Don’t even get me started on the generator that is supposed to run after sitting idle and that they expect to use the almost thirty-year-old gas. My damn mower won’t start after sitting over the winter, and while it is admittedly a pretty shitty mower that is asking for a lot of leeway from the audience.

I will say that the cast is solid. Chad Michael Murray and Danielle Harris do the best they can with the material. Sadly, there isn’t much they can do, but I appreciate that they don’t phone it in, despite how bad the script is. The movie is at it’s best when they are on screen. That is the only positive that I can say about Camp Cold Brook. I could give you more negatives but that seems to be overkill. This is a bad movie, and I can’t recommend that you spend any of your time on it.

Posted by Gutmunchers Lives at 9:01 AM