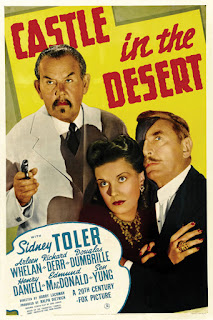 I’m back with another Charlie Chan movie review. As I have done with all the past reviews, I’m going to direct you to this page for my thoughts on a white actor being cast in an Asian role and how that is problematic. This review is just for the value this movie has as entertainment and not anything deeper. Now onto the good stuff.

Chan gets a letter from a woman named Lucy Manderley asking that he travel to her remote home, castle really, in the desert. Ah I see where they got the name of the movie. When he arrives the locals want nothing to do with him. He finds out what we already know, a man died at the castle after being poisoned. That is doubly troubling since Lucy is a descendent of the Borgia family who are famous for their history of doing away with enemies using that very same method. When Chan does finally arrive at the house he is surprised to find out that she never wrote to him, and no one is sure who sent for him. Deciding to leave he finds that the car has been sabotaged and that he as well as the others is stranded.

When an investigator hired by the family of the first victim he also dies from a poisoned drink. Someone takes a shot at Chan, his son Jimmy shows up with the local palm reader in tow, and a pigeon is also poisoned. It is up to the famous detective to unravel the plot or perhaps plots behind the shenanigans going on at the castle. In the end we get a satisfying ending that has a slight twist and is a lot of fun.

This maybe my favorite movie in the Charlie Chan movie series. The story is good and tosses a lot of suspects at the audience. Some are red herrings and others are up to something, but not murder. When you do think you are onto the identity of the guilty everything gets shaken up. The motive, getting control of the Manderley’s money, makes sense and is the cause for more than one conspiracy to be set in motion. The setting is one of the best in the series and you get a sense of isolation from a trick as simple as disabling the only car available. It reminds me of And Then There were None, only instead of the ocean it is a desert that cuts them off from help. The pacing is fantastic with not a single lull in the action. You must pay attention to every scene as there are clues being doled out. 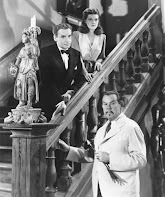 The dialogue is snappy and the cast is on top of their game. As always Sidney Toler brings a charm to the role of Chan that is honestly lacking in the other two actors who played the role. Henry Daniell is great as the sculptor who may have ulterior motives. You might recognize him from several of the Sherlock Holmes movies, which I really ought to cover for this marathon, as well as the amazing Karloff movie The Body Snatcher. Victor Sen Yung is solid again as Jimmy Chan and Richard Derr who did a ton of television work including a memorable turn on the original Star Trek series is great in a supporting role. It is my understanding that this was the last Chan movie shot before the budgets started to get cut due to the war. It shows.

If you are only going to watch one Charlie Chan movie this is the one to check out. Great cast, lead actor at his best, wonderful mystery, and a great setting combine for a movie that I think everyone can enjoy. I highly recommend Castle in the Desert.