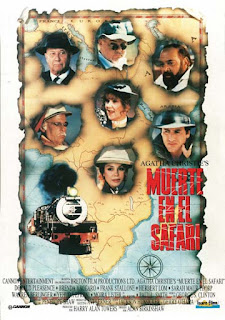 This is the third different version of the movie that I’ve watched and the second that I’ve covered here at the site. I suppose that this is a spoiler, but I still like the version from nineteen forty-five better than this one. But this is better than the one from sixty-five. So, there you have my review… just kidding.

A group of ten strangers are lured to an African Safari by a Mr. Owen. U.K. Owen… yeah unknown. Their first night in camp a record is played as per his instructions and each of them is accused of getting away with murder. Though escaping the hangman’s noose is going to be corrected as one by one they are killed. After each death a centerpiece from the dining table has one less Indian on it as they are busted off. The murders also sort of match the various lines from the corresponding nursery rhyme. Though some are a stretch. Eventually there are just two of them left so they know that one of them is the killer pretending to be another victim lured here to pay for their crimes. Or are they? Spoiler there is a neat twist that is intact from the original play/novel that is always fun.

First thing I wanted to mention is that I had no idea until I popped this one on that it was a Cannon production. Though that explains some of the casting as they tended to pull from the same pool of “B” actors again and again. With that out of the way I guess the next question is “Did this need another version?”. Short answer is probably not. Other than changing some dialogue around the movie follows the same basic premise of both previous versions that I’ve seen. With nothing new to see here if you have already watched them the mystery is a hard sell. This is further complicated by a plot that meanders a bit in the middle slowing the proceedings down when it should have been picking up steam. 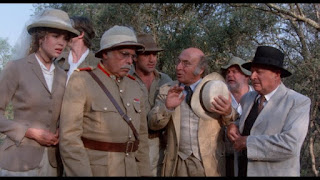 I didn’t think I was going to like the change in setting of the isolated house on an island, but the African Safari complete with a gorge on one side and hungry lions on the other works pretty good to create that sense of isolation that makes the story work. It also helps that I liked the cast and watching them interact with each other while bringing their characters to the screen. Brenda Vaccaro, Herbert Lom, and Paul L. Smith are fun to watch. This is especially so of Smith who has that “crazy eye” thing going on that makes him a perfect suspect! Though the best and most fun to watch performance comes from Donald Pleasence as Judge Wargrave. My only complaint with the casting is Frank Stallone as Lombard. He is supposed to be one of our main leads but isn’t that good of an actor. This is especially obvious when paired with one of the pros I’ve mentioned above. I needed more from the actor in this part.

I do like this story so any version of it already has a leg up with me. I also enjoyed the performances and I’ll pretty much watch anything with Donald Pleasence in it, so there is that. I suppose I can recommend this movie if this cast is to your liking or if Safaris are your thing. That said the original film is still the best. Though that might change since I just found out that there was another version of the movie shot in the seventies. Oh yeah I’m tracking that down!

Posted by Gutmunchers Lives at 12:21 PM