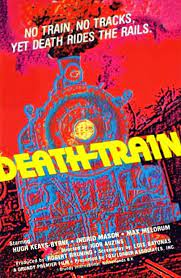 Most of us probably know Hugh Keays-Byrne from his roles in a couple of the Mad Max movies. But while doing some digging for mystery movies to cover I found out that he appeared in The Death Train as an insurance investigator trying to verify a cause of death before the company pays out a policy. To top it off this is a made for television movie, which I love, and an Australian flick! I’m excited to check it out.

Keays-Byrne plays Ted, the insurance investigator. He comes to a small quirky town as a formality before the company will pay out the policy. Previously we saw that the man who died was driving home when his car had some electrical issues that forced him to walk the rest of the way. It seems he was hit by a train and killed. But the odd thing is that the tracks were pulled up decades before. How can this be? Well, the locals are convinced that it was the legendary ghost train that got him. The man who died is the descendent of a murderer who killed an engineer in order to marry the man’s wife. The ghost has been driving his spectral train back to get revenge on all of the descendants of his killer ever since.

Now there seems to be a supernatural element to the story but as things play out it becomes more obvious that something far less spooky and far more sinister has happened. I won’t spoil the reveal, but Ted keeps chipping away at things until he unveils a plot involving a real estate deal with lots of cash on the line. Sorry but the ghost didn’t kill anyone! Still the resolution and how Ted gets there is a lot of fun and worth the trip so don’t be too disappointed.

The first thing that I have to say is that while I’ve always enjoyed Keays-Byrne in the Mad Max movies I never really thought of him as a great actor. Mostly because he isn’t given much to do in those action flicks. But here his performance is amazing. He brings a quirky energy to the Ted character that carries the movie. His line delivery is quick and snappy, his reactions to the odd folks that live in the small town is spot on and his interactions with the crazy hippie girl who keeps trying to bed him is fun as well. 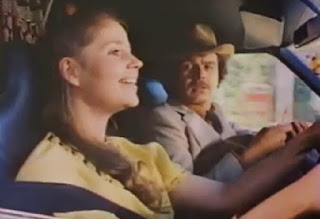 He is helped by an excellent script. The story moves quickly and throws enough curve balls at the audience to keep us on our toes. As an outsider Ted is dismissed by the locals but keeps at it to slowly piece together clues, which we get to watch him do. The movie shares all of them with us so when the solution is finally presented it feels as if we could have drawn the same conclusion. This seem simple but far too many bad mystery stories hold facts from us and that is annoying. Here we get the chance to sort it out on our own which is great.

There are some fun bits that I’ve not mentioned. The canned music that was also used on the People’s Court years later made me laugh. The rude lady that responds to Ted’s polite “Excuse me” with a “NO!” was also great. The doctor going into gleeful detail about the condition of the body had me laughing. Hell, even the weird bit with Ted always having a cigarette in his mouth but refusing to light it because he was trying to quit was cool. This movie has so much going for it that you have to give it a watch.

Obviously, I’m recommending The Death Train. It appears to be in the public domain, but I’ve only been able to find it on Archive.org. As of the writing of this article it is still there and free to watch. There is no excuse for you to not check it out.