Before we begin, I wanted to direct you to my thoughts on the controversy of white actors being cast in the role of Asian characters and the issues that arise from it. I realized that I’m going to be covering a lot of movies like this one and the Charlie Chan franchise so instead of having each of those reviews dominated by that discussion it was better to hash it out once here instead. The below is just judging the movie as a movie and not delving too deeply into other obvious issues.

Karloff is back as Chinese detective Mr. Wong. This time he gets involved in the murder of an antiquities collector who has recently come into possession of The Eye of the Daughter of the Moon, a rare gem from China that is supposedly cursed. Wong is called in because the collector has had death threats, which come true when he is killed by a gun that was supposed to be loaded with blanks. They were playing charades, which I guess is different from what we know as charades today. Instead, they were acting out a play of sorts with a husband finding his wife cheating on him… hey wait a minute! Yeah, this is a loose remake of Murderat Midnight that I recently watched and covered for the site.

Wong must sort out who killed the collector, and later his maid. There are some twists and turns with a missing letter in which the man speculated at who was trying to kill him and why. There are also those trying to return the stolen gem back to China where it belongs, and finally a wife who was made rather miserable by the man. So many suspects and so little time. Though in the end Wong assembles them and reveals the killer. 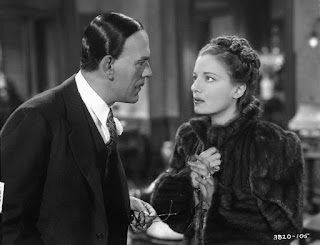 This is another solid movie. Though I was a bit disappointed when I realized it was a remake and not an original story. That sort of spoiled the fun because while they made changes to adapt it to the Wong character, they didn’t change the mystery much itself. This includes the identity of the murderer, though his motives have changed. That took a lot of the fun out of the proceedings for me. That said the story is interesting, the action fast paced, and the motives/methods of the killer plausible. So, if you haven’t seen Murder at Midnight yet I think that this will be a fun flick that you will get a kick out of.

As before Karloff is very good in the role of Mr. Wong. Again, the idea of casting him as an Asian character is problematic but he does his best to avoid the pitfalls of speaking in the heavily accented and stereotypical Asian accent. That lessens the blow a bit. He commands every scene he is in and is surrounded by a decent supporting cast. This movie was from a “B” studio, so the budget was low again, but this sort of formulaic movie doesn’t require much in the way of sets and locations beyond the basics.

I’m going to recommend The Mystery of Mr. Wong. It is a straightforward and fun little murder mystery on a budget that knows what the audience wants and delivers the goods. Karloff is great and fun to see on the screen and if you pay close attention to what is transpiring on screen you have a decent chance to figure it out before the big reveal. I hoe the other four are originals or at least based on something that I’ve not already seen.