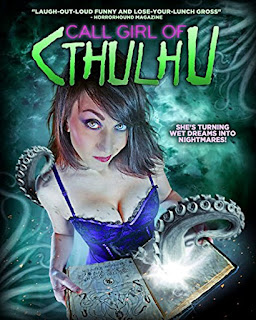 It doesn’t happen often anymore that I pick up a movie solely based on the title, but that is exactly what I did here. While browsing for a copy of Bone Tomahawk, which I will eventually get around to reviewing here, I saw this on the shelf at my local used shop and had to have it. I think we can all agree that most of the time this sort of purchase ends in disappointment, but not this time around.

The story opens with a man named Carter being questioned by the police. They mention that they are dealing with forty-three bodies and a new STD. This movie already has my attention. Thru a series of flashbacks, we see that Carter is an artist and virgin who becomes obsessed with a hooker named Riley. The thing is he really is a good guy so when he hires her to sit for one of his paintings, she takes a liking to him, and they start to date. But things go wrong when a crazy one-eyed professor asks Carter to recreate a book, the Necronomicon I think, so that they can stop some cultists from summoning Cthulhu. Many weird things happen before we get what is an ending that is honest to the Lovecraft universe.

I kept things a bit vague above to not spoil the movie. But be warned that the rest of the review is going to ruin some of the coolest gags in Call Girl of Cthulhu so if you don’t want that to happen skip to the last paragraph. To begin with the basics this is a very low budget flick that uses the resources at hand very well. They have a smallish cast and just a couple of locations that I think could have all been sets in a single warehouse. They keep the cast small, though we do get a lot of faceless cultists and a nice batch of demonic hookers. But as far as speaking roles go, they kept it to a bare minimum. 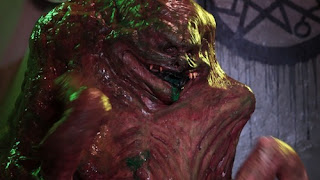 Toss in some surprisingly plentiful sleaze and nudity with some jokes that land well, and you have a decent flick. Oh hell I didn’t even mention the STD that gives one unfortunate fella a monster dick and not in the good way! Call Girl of Cthulhu checks so many boxes that I can’t help but to highly recommend it. It is a fun trip from start to finish and I’m glad that the title caught my attention. Check it out.

Posted by Gutmunchers Lives at 3:47 PM