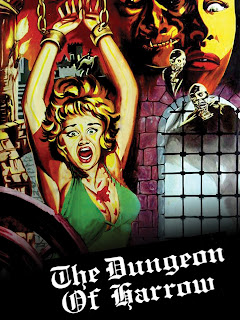 The movie opens with a man facing away from the audience speaking towards his family crest bemoaning the fact that he is leaving a legacy of decay and horror. Then we get a flashback that is most of the rest of the movie. The man is Aaron who is the son of a wealthy family. He is shipwrecked when a storm blows them off course. It is just he and the captain washing up on shore, though they do find his family crest in the debris. He is a bit of a spoiled rich boy complaining about the fish before the captain points out they are lucky to have something to eat.

The island isn’t deserted though since there is a man, Count de Sade, who lives in a castle with some servants. Right away we know he is nuts when he starts talking to the evil side of his personality. Apparently, he likes to torture his staff and guests, because the thinks that they are either out to kill him or are pirates. So a guy named de Sade is a bad guy… go figure. Eventually Aaron and the captain run afoul of them and end up locked in the castle. Some bad stuff happens, and a bunch of folks die before we see that inexplicably Aaron and his lady love get leprosy and can’t leave the island. Meh.

This regionally shot movie, in Texas if you are interested, was made by amateur filmmakers who didn’t know what they were doing. I know that sounds mean but this is an awful movie. The pacing is glacial with long scenes of meaningless dialogue that does nothing to move the story along. The scenes are also disjointed with attempts to explain the action with voiceovers between them. They try and fill in the blanks but even with this the story doesn’t make much sense. I mean where the hell did the leprosy thing come from? I get that they wanted to connect Aaron to the count by having to lock his lady up in the basement. Maybe he caught it from the Count’s wife when he was locked up with her? Honestly, I just don’t care. 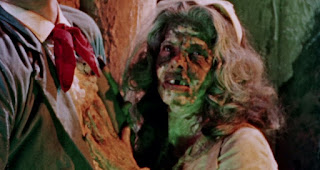 The acting is bad with the dialogue being delivered in one of two ways. Over the top scene chewingly bad or without emotion or inflection in the voice. Both are annoyingly terrible and make for a miserable experience. As far as special effects go you need to see the boat scenes early in the movie to believe it. Someone was in the theater club during high school because they basically have a couple of rooms that the crew offscreen is rocking back and forth. It also appears that they are made of balsa wood because they flex like crazy. The only “creature” is the Count’s wife who is crusty and covered in cobwebs. I suppose the makeup is okay, but much like the previously mentioned sets it has a community theater vibe to it.

In digging for the next hidden gem, I end up watching a lot of bad flicks. The Dungeon of Harrow is one of them. As much as I love regional cinema most of them are ineptly made by folks who may have had the money but certainly not the talent to shoot movie. Do yourself a favor and skip this one.