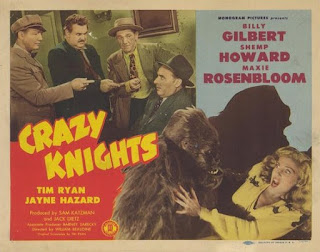 I’m always on the lookout for movies that I haven’t seen in my many years of watching goofy stuff from the forties and fifties. One of my favorite mashups is when filmmakers take horror and comedy and do an old dark house type flick with some laughs. Crazy Knights aka. Ghost Crazy (you can find it under both titles) is one of them.

This is an interesting flick. A group of carneys are headed to their next show when they run into a pretty woman and her uncle who are headed to a family country house. Someone is trying to kill the uncle for reasons I don’t think are every completely explained. But none of that matters because two of the carneys are played by Billy Gilbert and Shemp Howard. Yes, that Shemp Howard! During the time between his stints in the Three Stooges Shemp did some solo movies and this is one of them.

There are lots of shenanigans packed into the movie with a creepy housekeeper, a gorilla, tunnels, a creepy repairman, and a voice that taunts them. Many of these gags might seem familiar to fans of the Three Stooges. Where this movie succeeds, and other fail is in the execution. Howard is great, as you would expect. But what surprised me is how well he and Billy Gilbert worked together. I recognized Gilbert from supporting roles in other movies but had no idea that he had such great timing. This means that the jokes land and there are a lot of laughs in Crazy Knights. This pair worked on three or four other flicks together and I need to find them. 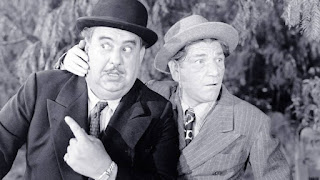 The non-comedic bits don’t work nearly as well. The rest of the characters are rather forgettable, and the action/romance is boring. Then again, I’m thinking all of that was just to tie together the comedy bits. The best examples of a movie like this normally has a great supporting cast and story that gives you more than this, so I have to knock my overall rating down a few notches. Still the funny stuff lands enough that I do think this is worth checking out.

If Shemp Howard isn’t enough to convince you to check out this one then how about the fact that it was directed by the always fun William “one shot” Beaudine? He was well known for getting the movies in on time and under budget, but I’ve always found them to be entertaining and fun. The guy had the ability to make something worth watching despite the budget, cast, or script. That is probably why he has over four hundred directing credits and that doesn’t include the many lost films he worked on. Heck if that didn’t get your nerd juices flowing the movie was produced by the legendary Sam Katzman. Again, a guy who cranked out a lot of movies, many of them genre classics!

This is a perfect storm of creative folks that I’m a fan of who combined to make an entertaining if not original movie that I’m recommending folks check out. This can be found on the web and is public domain. There is nothing stopping you so go watch it!