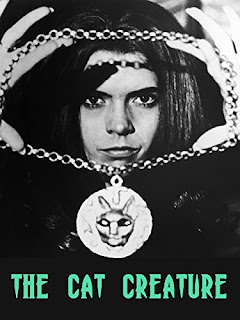 This made for television flick is a by the numbers take on the vampire myth but has a certain charm that I rather liked. Things kick off with an appraiser going to a spooky old house to look at the collection of a wealthy deceased man. This includes a basement full of Egyptian artifacts. He leaves to go get his recorder and we see a thief sneak in and steal a necklace from a mummy. Well, that isn’t going to end well.

Without the necklace the mummy comes back to life and kills the appraiser after he returns. We then see the burglar trying to sell off the stolen trinket but the woman who runs the shop tosses him out. She doesn’t want to deal with hot merchandise you see. When her shop assistant picks up a stray cat and then tosses herself off a balcony there is a job opening that is filled by a new girl named Rena. I’m sure that won’t be important later. It is because Rena is the mummy come back to life. She needs to drink blood to survive and can turn into a cat because she was a follower of the cat god Bast. Toss in a local professor called in by the police to make sense of the Egyptian stuff and a police detective for a good time.

I’m glossing over a lot of the plot because I don’t want to spoil anything. Yeah, I know that I let you in on the fact that Rena is the mummy, but that is so obvious it doesn’t matter. The Cat Creature is a solid movie with a decent plot and direction. The story might not be all that original, but it excels in the execution. I was amused to find out after watching this that the movie is an unofficial remake of The Cat People, which is my favorite Val Lewton flick. They certainly double down on this by casting the leading man from that flick and its sequel as the appraiser who meets his end early on in this one. That actor was Kent Smith in case you were wondering. Though if I’m being honest this movie doesn’t come close to the classic film it was inspired by, but then not much does. The pacing of the story is decent, though it does drag a little in the middle. The script was written by Robert Bloch so that shouldn’t be any surprise. He knows the formula for writing horror and makes sure that something interesting or important is happening to keep the story moving along. The cast is filled with familiar faces like Keye Luke, John Carradine, Stuart Whitman, Meredith Baxter, and David Hedison. There is a lot of talent in front of the camera and that makes The Cat Creature all the more entertaining to watch.

If I had a complaint, it is that even by the standards of the early seventies made for television movies The Cat Creature is awfully tame. They lean too heavily into the attacks being shown as shadows cast on a wall which I understand is an homage to The Cat People, but there they use it sparingly as the payoff for the action here it is used again and again. This gets old quickly and I was hoping for some variety.

In the end this is a solid if unremarkable effort. I’m glad that I watched it since it checked a lot of boxes for me. Remake of a movie I love, fun cast, and made for T.V. are all things that I enjoy. But I don’t know if that is going to be enough for the average viewer. I suppose I give The Cat Creature a lukewarm recommendation.

Posted by Gutmunchers Lives at 9:41 AM