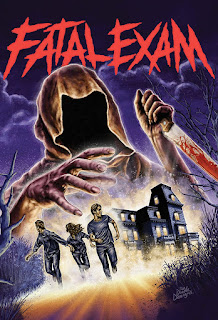 I’m always on the lookout for older movies that I’ve never seen before. Fatal Exam has been on my radar for a few years as it has a great cover/poster. But then I finally got around to watching it and I now see why it was never recommended to me back in the days of the Mom and Pop VHS stores. Yikes!

The movie opens with someone pounding on a guy’s apartment door. The guy’s name is Nick and we quickly… well not quickly but eventually find out that he is a college student, has a friend named Roger and a sister, Dana. They are all in the same parapsychology class. Oh, the guy pounding on the door is a mullet having sword carrying maniac. But it was all a dream anyhow so who cares? The final exam for the class is spending a weekend in a haunted house where we see in a painting that the guy from the earlier dream is the same dude who killed his family at the house and now haunts it.

The three of them as well as some classmates head out to the house. After wandering around doing nothing they go to sleep and then a head shows up in a coffee table. Then they see some ghosts, a couple of them disappear, and they find a painting. The painting leads them to go digging on the property for some buried treasure because… reasons. Then we get a long monologue about science and parallel universes trying to explain what is happening. This confused me because nothing is happening. Then we get a finale where we find out that *gasp* the creepy professor from earlier is trying to do a ritual by sacrificing the kids so he can make a deal with a demon for ultimate power.

This movie is awful. First up it is almost two hours long and has maybe fifteen minutes of interesting material. Though I might only have thought it was interesting since everything else was so monotonous. The acting is dreadful and the dialogue tedious. There was nothing natural about these characters and I was rooting for the end credits to show up after less than twenty minutes. The editing is also quite bad allowing shots to linger long after they should. I don’t need to see them investigate the basement of the house for ten minutes! You can show a couple minutes and then use the dialogue to tell us that they were thorough. The day for night is a disaster as well with them going to sleep at night with a window behind them showing that it is broad daylight.

Despite a release date of nineteen ninety this movie was shot in eighty-five and took a few years to finish. That explains the mullets, giant hair, and clothes. This was my favorite part of Fatal Exam, but then I’m a child of the eighties so that might just be me. The synth soundtrack is also very similar to other output from the decade, but here it is very intrusive. Honestly how can you add music to a scene and have the levels so far off that you can’t hear the dialogue?

The gore is negligible with a throat cut being the highlight. We get a very cheesy looking demon and a guy in basic white makeup playing the ghost. Even for a low budget I found the proceedings tame. This along with the horrible performances, bad pacing, and other filmmaking mistakes makes Fatal Exam a movie that I would have been happy to never of checked out. Still, it does have an awesome cover. Take my advice and stop there.

Posted by Gutmunchers Lives at 1:41 PM