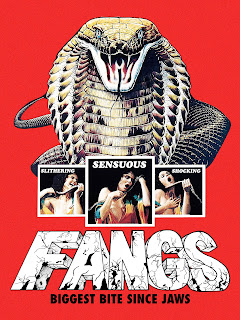 This is a strange little drive-in flick that I’ve not checked out before. It has to do with a fella named Snakey Bender who has this moniker because he likes snakes and carries them around with him. He pays the local kids to catch birds and rats to feed them and generally seems like a harmless old guy. We even see the local teacher, Ms. Williams, give him a letter from her class thanking him for bringing his snakes in to show the class. But there is also a darker side to things.

The teacher has a weird fetish about snakes and while we don’t see anything on screen it is sleazy as hell. Because she asks him to bring his friends over this makes Snakey think they are in a relationship. When the creepy brother and sister who run the local store find out they use this against Williams to make her “entertain” their advances as well or else they will tell the school board. Again, it is only hinted at but is clear what happens. There is also a booze guzzling preacher who finds out as well and makes her convince the kids to stop catching critters for Snakey to feed his friends. The only other thing that Snakey enjoys is his John Phillips Sousa band music, which he listens to with his friend Burt. But him bailing on their weekly concert is the final straw that pushes Snakey over the edge. Soon he is getting his revenge by killing off those that have wronged him and pushing them off a cliff in their cars.

This is a great low budget drive-in flick. This is a simple revenge plot that has a character who honestly overreacts to what he considers to be a slight. I mean did these people really deserve to die. I did appreciate that they gave us the trauma of him “breaking” up with Ms. Williams and then his subsequent loss of his friend Burt as the reason. Sure, it is a it delusional for him to think that these relationships were more then they really were, but that kind of makes his character more of an innocent and therefore more sympathetic. I do prefer my psychotic killers to be someone I can root for you know. 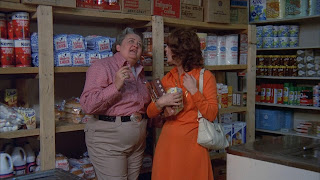 The story does drag a bit while they are setting up this scenario and introducing us to the characters. But when the ball gets rolling it is a lot of fun. Don’t expect any gore or explicit stuff like that. This is an early seventies movie so most of the kills are implied at or offscreen, as is most of the sleazy bits. But it is done in a way that I found satisfying and it gets good. I really dug how they decided to end it, which I did not see coming but thought was perfect.

The cast is solid and is filled with characters actors Bruce Kimball, Les Tremayne, and Marvin Kaplan. Though the actress that played Sis Palmer, the evil lady shopkeeper, seemed awfully familiar so I looked her up. God Damn Large Marge is in this! I suppose if you aren’t a Pee Wee’s Big Adventure fan that might not mean much to you… but then if you aren’t a fan of that classic, you can get the hell off my website! Really though the cast does a wonderful job with what is admittedly a silly premise.

You can find this movie both under the Fangs title as well as the Holy Wednesday title. I don’t believe that other then the title card there is any difference between them. Just about the time I think that I’ve seen everything a movie like this pops up. Mostly I can see why it wasn’t on my radar, but sometimes you get a fantastic little flick like we have here. I highly recommend it.