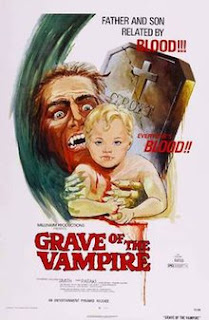 This along with Blacula and Count Yorga is one of my top three “drive-in” vampire flicks. I’ve been watching this one for years having first seen it on a local horror hosted late night movie show. That transitioned to VHS and then to those budget public domain DVD sets. Of course that means it has always been a beat up and neglected print. But now the folks over at Shout Factory have put out a remastered Blu-Ray with some deleted scenes. Damn I’m excited to check this one out!

The movie opens in the forties with a couple sneaking off from a party to have some sexy type shenanigans in a nearby graveyard. That ends up being a terrible idea because a vampire named Caleb Croft climbs out of his coffin drinks the fella dry and has his way with the lady. She gives birth to a son who is part vampire and nurses him. Though she eventually dies. The action moves forward to the early seventies with the now grown-up boy, James, looking for his bloodsucking father to get some revenge for what was done to his mother.

He does eventually track him down and signs up for his class, Croft is teaching night classes of course! This leads to some murders as Croft does away with an annoying college girl who has figured out his secret and a love triangle of sorts. See James’ lady friend is the spitting image of Croft’s dead vampire wife. All of this results in a séance, more murders, and a twist ending where James puts his father down but with twisted results.

Again, I’ve always loved this movie. Long before Blade we had James the day walker half-vampire half-human. The late great William Smith is excellent as James Eastman playing the character with the right mix of brooding and anger. Michael Pataki is fantastic as Caleb Croft oozing evil as he murders his way thru the cast. He isn’t the tortured type forced to feed but seems to enjoy playing with his food. The rest of the cast is solid.

The story is paced well without any slow spots. Every scene we see is there to move the plot along and either develop the characters or set us up for something twisted that will come along shortly. More than once the movie does something unexpected, mostly due to the unpredictable nature of the Croft character, so you are always guessing as to what is going to happen next. I also thought that the idea of him fathering a half breed was a neat take on the vampire myth. Sure it might not seem so unique now, but for the early seventies this was unexpected. I will admit that there is an odd jump with new characters being quickly introduced for the séance which sets up the ending. But I’d rather they just dive in and keep things moving along briskly then spend time setting up more characters that are just there to be killed off.

This new Blu-Ray has a fantastic transfer which allowed me to appreciate how well Grave of the Vampire was shot. There are so many shadowy scenes that I can actually see now and while it never bothered me in the past this allows me to enjoy the movie that much more. I was also impressed with the deleted scenes. Most of the time these are just bits of dialogue that were trimmed out for pacing reasons. But here the scenes are extended lingering shots of Croft dispatching his victims. While not overly gory they do have a disturbing vibe to them, and I can see why they were trimmed initially. Though it is sad because we lose some excellent bits with Pataki. The guy was clearly having a blast playing Croft.

Grave of the Vampire is one of those rare flicks that has aged well. It is great to see a company spend the time and money to clean up and give it a proper release. I highly recommend it and can say that the new Shout Factory Blu-Ray is the way to watch it. I don’t often recommend people go buy physical media anymore, but this is one of those times that you should.