It was only a matter of time until I got around to covering Beaks: The Movie here at the site. It is notoriously bad, and this might shock you, but I’ve never watched it until now. Things kick off with some cheesy eighty’s music and footage of a landfill. Human beings have wrecked the environment and it seems that his has pissed off the birds. We also get to see people doing some skeet shooting only with real birds being released and blasted away. I don’t think that this was special effects either. One strike against the movie. 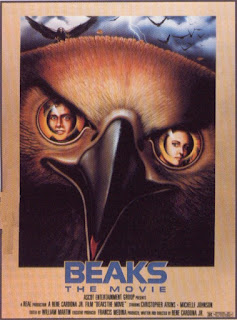 How do I know that the birds are angry? Well, they take down an airplane, pluck a dude’s eye out, doves peck a chicken farmer and his wife to death, and from the various bodies that are lying around the sets. The best sequence is a bird of prey, I think it was a hawk, taking down a hand glider! All of these are done with practical effects work and I guess look okay. Except for some occasional ocular violence, it is all rather tame. That is strike two against the movie.

Most of the story is us following a couple of journalists trying to track down the story. They are played by Michelle Johnson of Waxwork fame and Christopher Atkins who is best known from the Blue Lagoon. Neither of these actors are given much to do by writer/director Rene Cardona Jr. as this is basically a lame rehashing of Hitchcock’s the Birds. Other characters beyond our leads sort of appear and disappear as needed. Some to die and others to be terrorized by the birds. All in all I wasn’t sure what the story was supposed to be or who our main characters are. No one is really developed or at all engaging.

This makes for an odd movie to watch. I was never quite sure what was important and what was just padding. I do know that the stock footage of birds flying is padding and is used to make it seem like there are a lot of them. Also, when the actors are in scenes with them it is clear that all the birds want to do is get away from them. That doesn’t make them too scary. Hitchcock used puppets and composite shots to at least make us think the characters were in danger. No such luck here.  The eighty-seven-minute runtime feels long and is at times a chore to get thru. That is strike three for the movie.

So, I’m clearly not going to recommend this, right? Well, here is where my review is going to get a bit confusing. Beaks: The Movie is a horrible mess that doesn’t make a lick of sense. From start to the ending that is basically a nonending, nothing is explained or resolved it’s clear that Cardona had no idea what he wanted to do with the script. That said I suppose that the cinematic masochist in me feels like movie fans, especially horror fans need to see movies like this. Despite the flaws and eye rolling there were times that I kind of enjoyed it. I know that makes no sense, but isn’t’ that appropriate for this movie?

Consider this lukewarm recommendation to come with some caveats. This isn’t a good movie. It is slow at times. And we movie nerds need to be able to say that we have seen it. Wear it like a badge of honor… I know I will.