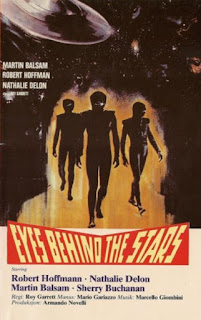 This was an interesting find for me. As I’ve mentioned before I have a huge stack of movies that I’m always meaning to watch. Every so often that pile becomes too large and falls over, which means it is time to dig in. This Italian science fiction flick caught my eye the last time they crashed down so I figured it was the universe telling me something. Let’s take a look at Eyes Behind the Stars.

The action starts with a photographer and his model working in the woods. He is taking a lot of pictures when they both start to feel creeped out. Instead of bailing he continues to shoot as he wants to get the work done. After developing the film, he notices strange figures in the background. The only thing is that neither of them saw anything while they were there. This leads him to go back into the woods and try to capture more shots. That is a terrible idea as the aliens, and yes, they are aliens, abduct him. Not only that they eventually get the model too, but not until she calls a reporter named Tony. While talking to her he “borrows” the negatives of the pictures. This is important later.

The rest of the movie is Tony along with a UFO expert and parttime Antiques dealer digging to discover the truth. Toss in the silencers, which is this movie’s version of the men in black, some aliens, the local cops, and the military for even more fun. Everyone is after the negatives and trying to cover up the existence of the visitors, so this makes Tony very popular. It all comes to an explosive and surprising end.

When I sat down to watch Eyes Behind the Stars, I was expecting a cheesy creature feature. That isn’t what I got at all. Instead, this is a fun thriller with lots of twists and turns. The UFO conspiracy theories are flying as we have not only aliens, but secret government projects, and a multinational shadow organization trying to hide things from the public. People get roughed up and even killed by these groups to hide the truth! The seventies were a weird decade where no one trusted “the man” and no conspiracy was discounted. That is why there are so many fun “documentaries” about bigfoot, UFOs, other cryptids, and anything else where someone could let their imagination run. This movie tosses a bunch of it at the audience, and I enjoyed the heck out of what I was watching.

The special effects aren’t great. The aliens are just guys in jumpsuits and helmets. Nothing worth diving into there. The miniature work is okay, but again nothing that is going to make you sit up in your chair. Most of the time we see the aliens moving around from a POV shot with a weird fisheye lens that I think works well. The movie also does a decent job using sound and light to not only let you know the visitors are around but when they attack as well. We get a little bit of action as there is one shootout as our main characters rescue someone from the silencers, but for the most part this isn’t an action-packed story.

Overall, I had a blast with Eyes Behind the Stars. I do wonder if it is partially due to my nostalgia for the decade when I first started watching flicks and my fascination with UFOs as a kid. Will this translate as well to someone who doesn’t share this experience? Not sure but I still think that it is worth checking out.

Posted by Gutmunchers Lives at 4:38 PM