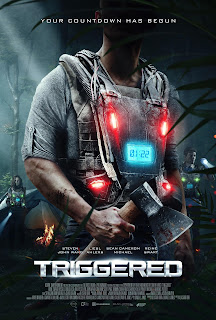 The title to this movie caught my eye and when I read the plot synopsis, I thought I’d check it out. We have a group of college aged kids coming back to town for what I think is their five-year high school reunion. They end up in the middle of the woods camping and partying when they all are gassed and wake up with bombs strapped to their chests. It is then that their high school science teacher walks into the clearing and tells them that they deserve this before shooting himself in the head. Later they find a missing friend who has more information about what is going on.

Each bomb has a timer. If it runs out, you go boom! The times are all different and the person with the least time has the lights on the device go read, while the person with the most is blue. There will be only one winner and the way to get more time is kill someone else and steal theirs. So, they have to murder each other to live. There is also a subplot about the teacher’s motives and why these kids were chosen that I won’t spoil here.

This is a decent movie. We have seen this sort of story so many times in the horror genre going back to Battle Royale. It has been copied in several movies with mixed results. Here the story is helped by the mystery of why they were picked and in the end which of them is actually responsible. Again, I’m keeping this vague because I don’t want to ruin it. Mostly because I don’t think that the movie will hold up well without the wait for the big reveal. Really don’t watch or read any spoilers to Triggered if you want to enjoy the flick. 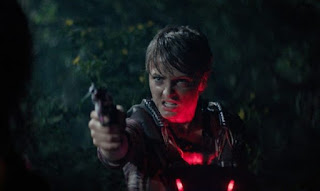 The pacing is decent at the beginning where the characters are introduced, and we see where they fit in the story. The party guy, the bitchy girl, the smart girl, stoner dude, etc. There is one character that is presented as one of the stereotypes but ends up much differently. That was a clever twist and along with what I’ve already mentioned shows me that there were some attempts at switching things up and making this story unique. I appreciate that. At the same time, I do have to point out that after they know the rules to the game it becomes very much pair off and walk around in the woods and is predictable. This drags the proceedings down a bit in between the action sequences.

The gore is decent and shockingly a lot of it is practical. There are smashed heads, cut throats, explosions, kneecapping, and other gory bits. The camera doesn’t shy away from them either lingering on the kills showing us all we would want to see. My favorite gag is a knife to the eyeball. That is especially fun. Oddly enough they also go for some realism with characters not dying right away and again they linger on their agonizing deaths. I didn’t expect that, but it does make Triggered stand out.

Like I mentioned earlier this is a decent movie. While it does have a been there done that feel they do enough to make it stand out. And despite a few slow spots I do like the kills and the conclusion to the movie. I didn’t bring this up in my synopsis, but the ending is very cool. Again, I have to be careful to not spoil it. I’m going to recommend this one.