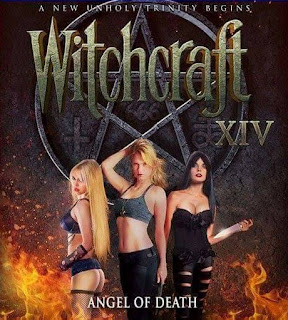 Nearing the end of the Witchcraft franchise with just three to go. In an interesting twist all three were shot at the same time and are basically three parts of one much longer story. It is my understanding it was their attempt at telling an epic Witchcraft tale. Basically, like a shitty Lord of the Rings. Cool… I’m sure they are going to screw it up.

William, Lutz, and Garner are all back and recast yet again. This time there is a girl named Rose who has powers which she uses to kill people that have pissed her off. But she feels guilty afterwards and tells her Mom that she is afraid she is a witch and has murdered them. She gets yelled at and sent to her room. But as soon as she is out of the frame her Mom calls someone to discuss her powers. So, she knows that Rose is a witch.

Detectives Lutz and Garner are investigating the murders and run into William who was called by a friend that herself was the person on the other end of the line when Rose’s Mom made her call. Stuff happens, people get kidnapped, Yoga is done, and we find out that the Yoga studio owner is the angel of death. Well part of him as the other part is stuck in Hell and only Rose can set him free to fully destroy the world. But there has to be something else going on as the angel of death was having phone conversations with someone else all during their evil plan. Bad CGI magic fights happen, and everyone lives happily ever after. But wait there are two more movies with these characters so probably not.

I want to give the filmmakers credit for trying to do something different with the three movies telling one giant story. That is very ambitious for a low budget project like this. Sadly, they just don’t seem to be up to it. The plot is again very thin and repeats the “summon something to destroy the world” plot that all of these flicks have used over and over. Any attempt at some other type of motivations for the villains would have been a welcome change, but nope. They very quickly flushed any interest I had down the toilette with this repetition. 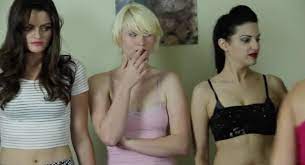 I didn’t think it was possible, but they continue the same mistakes from past flicks and even double down on some of them. The acting is terrible again with the new cast being even more inept than past ones. This is especially so of the actor playing William who upon hearing of his friend’s death gives a performance that has to be seen. It approaches Tommy Wiseau from the Room bad. Not quite there but close.

The sound issues continue with dialogue that can’t be heard. But it also has music and dialogue that changes volume while in the scene that had me constantly turning my volume up an down. That is a new and very annoying thing. The camera that they used must have been a lower end one with auto focus because it keeps shifting in and out of focus as characters walk into and out of frame. There is also a fake knife that looks like one of those gag props you can buy at the Halloween stores that pop up ever October. None of this surprises me that much as these three movies were produced by David Sterling of Camp Blood infamy.

These last couple movies are going to be hard to get thru if they are of the same quality as this one. I’ll do it because I’m stubborn, but damn. Obviously, I’m not recommending Witchcraft XIV: Angel of Death.

Next up Witchcraft XV: Blood Rose