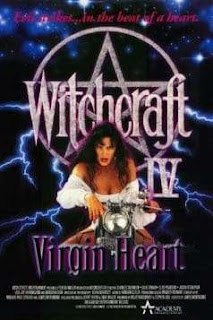 Here we are at the fourth installment of the Witchcraft franchise. This time around we see that William is still a lawyer, but now isn’t defending people but instead I think is doing tax law. All that changes when a woman stops by begging him to defend her brother. When the movie opened, we saw a boy and his girl making out in the woods. Stuff happens and she gets kidnapped. The cops think that he killed her, the body shows up later, but we know it wasn’t him. Later we find out that the hoods who killed her work for a local radio DJ and talent agent who also happens to be an evil warlock. He claims that he and William are the last of their kind… but there are twelve more movies to go so I’d have to say he was wrong.

Along the way to the final showdown with the bad guy William meets and gets very friendly with one of the evil warlock’s clients named Belladonna. She is a stripper and blues singer played by the late great Julie Strain. It was nice to see her on the screen again as it had been years since I watched one of her flicks. Sadly, that is the last thing I’m going to say nice about The Virgin Heart. The warlocks have a big showdown, which again consists of several shots to the groin until William rips out his heart.

So far, I have held out hope that one of these movies would be worth my time. Each one seems to have a different director and writer combination so you would think that they could accidentally stumble over a decent script. If that is destined to happen then it will have to wait because this isn’t that movie. The story is filled with padding starting from the first scene. There is this long-drawn-out opening showing us the girl being kidnapped and killed, though offscreen so no fun gore there. That serves to setup why William gets involved but these characters are useless after that and I wonder why they spent so much time on it. There is another bit with that boy’s sister where she is sort of setup as his love interest but then he is also pursuing Belladonna. Spoiler the sister has very little screen time but does help explain the ending sort of. In the end this seems like a waste of time.

This movie also has the typical padding of people walking, talking on the phone, lighting cigarettes and other such thrilling things. This is what you get when you don’t have scenes and dialogue prepared to move the plot along. The movie is like watching paint dry and that isn’t fun either. This is all despite them trying to create some sort of film noir hard-boiled detective vibe including random voiceovers where William is talking directly to the audience. Cool idea but inept execution. None of it worked for me.

The soundtrack is also changed up, but still not good. We get some blues mixed in with generic rock music, remember that the bad warlock this time is a DJ, and some of the same mediocre synth cues. The performances are also as wooden or at least I think they are. The audio is so poorly done that I couldn’t hear long stretches of the dialogue so I couldn’t tell what they are saying. This had to be from when they were shooting on set because you have two actors sitting across from one another with one being crystal clear and the other sounding muffled as if they were under a few blankets. Honestly if you don’t have the skill to properly record the sound on set or the budget to do some dubbing in post then you shouldn’t make a movie!

I have more complaints. The kills are lame, like before. There are just a couple and it all happens off screen. You would think that the hearts getting ripped out would be cool, but it isn’t. Now this might seem to be petty, but I also was annoyed that the title didn’t apply. When we had The Temptress there was a temptress. Deadly Kiss had a warlock killing ladies with a kiss. There is no damn mention of the heart being a virgin heart in this movie. I had one expectation for this franchise after three movies and they couldn’t even get that done properly.

I doubt that this comes as a surprise but I’m not recommending Witchcraft IV: The Virgin Heart. It’s terrible. But I’m going to keep the hope alive that there will be a good one in the remaining twelve. So, with that in mind…