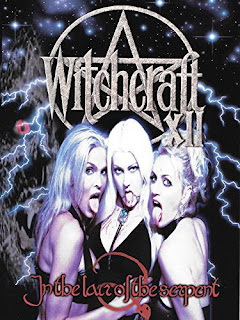 God Damn it they did it to me again. No more Stephanie Beaton as Lutz, in fact there is no Lutz in this movie at all. But before I could breathe a sigh of relief the name Brad Sykes popped up as the director and writer. I believed I mentioned the other terrible horror franchise that I’ve reviewed this year, Camp Blood. Well guess who created and directed the first three installments of that franchise? If you guessed Brad Sykes, you would be right. I’m feeling that this might be the perfect shitstorm of awfulness.

We are back in Los Angeles and watch as a woman and man go bar hopping and end up in a strip club. The guy is Jeff, and the lady is his sister Cindy. Wait dude you took your sister to a nudie bar to drink? Okay then… Jeff hooks up with a girl on the way to the bathroom and leaves with her never to be seen alive again. That is a bummer. Then we see William pull up, it can be confusing because he has been recast again and visit Cindy. It seems that he was best friends with Jeff. He and Cindy also have a history together.

Being the super cool lawyer warlock that he is William figures out something bad is going on. So, he uses some magic to watch part of the movie that we already watched only upside down. That helps him get a license plate number and with an assist from the cops the tracks down the lady to was last seen with Jeff. Thru some rigamarole he eventually ends up face to face with the serpent god who is killing everyone, he uses the women to lure his sacrifices to him. Some lighting lasers shoot around, and the movie ends with William and Cindy watching home movies. 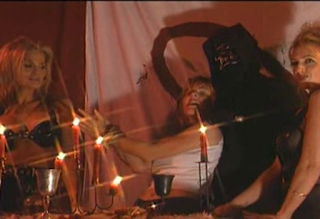 If you have been reading my reviews, you know that I don’t like the Witchcraft movies at all. I wanted to find one that wasn’t terrible as it is always my goal to unearth a hidden gem. But this franchise is the same recycled story that itself isn’t enough to fill fifteen minutes screen time padded out with nonsense that itself is an excuse to pop from one softcore naughty escapade to another. Having watched Sykes’ movies in the past I can tell you one very important fact, he can’t shoot those sorts of scenes. Are you beginning to see the problem?

We have a Witchcraft movie that while it tries doesn’t give the viewer the sleaze that has been promised and delivered from the previous ten or so movies. Again, I’m not a fan of this which should be abundantly clear by now. But damn it if you aren’t going to hang your hat on that sort of thing then that means you need a plot and characters. We also don’t get that which means this is a huge failure. It doesn’t even work as a crappy Witchcraft movie!

I could talk about the normal padding, but we have already beaten that horse to death. The bad guy spends most of the movie in a crappy Halloween mask and hooded robe shooting badly done laser lighting out of his eyes. The one highlight is when he is unmasked, and we see he is a snake god. That makeup job is actually really good for the low budget production that this is. I give them props for that. Sadly, that is the only good thing about Witchcraft XII: In the Lair of the Serpent. This is as bad as any of the previous eleven attempts, and they were all firmly in the miserably horrible territory. Skip this one like the rest.

Next up Witchcraft XIII: Blood of the Chosen