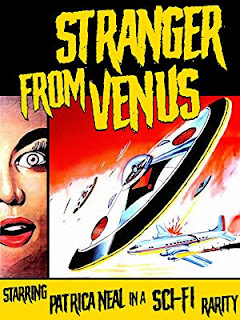 It has been a while since I've done my Fab Fifties Friday reviews. Here I’ve found another oldie but goodie that I’ve not seen before. This is another of those British movies that must not have gotten a lot of play on the late night shows I frequented back in the day. Pretty excited to check it out.

The story takes place in an isolated small village. One night there is a strange light in the sky and a mysterious man shows up at the local pub. He has no money, acts oddly, and is clearly an alien! There was also an accident where a local woman was seriously injured in a car crash that was caused by the lights. She shows up after everyone has found the car and is assuming the worst. She has injuries, but they are healing. Sure enough the stranger admits he helped her and that he is from the planet Venus.

Why is he here? This isn’t one of those invasion flicks but is instead takes a serious look at the human condition. The Stranger asks that the leaders of the world come to a meeting with the soon to land representatives of his civilization. He has arrived early to set things up and prepare the world. The government men and military instead decide to capture that landing party and keep all the alien technology and knowledge for themselves. We really do suck, don’t we?

I really liked Stranger from Venus but I’m afraid that it might not go over well with everyone. If you are looking for a silly “B” Sci-Fi movie then this isn’t for you. There aren’t a lot of special effects and not a single rubber monster to terrorize the locals. Instead you have a normal looking guy that keeps trying to help everyone around him only to be taken advantage by the powers in charge. In this movie the human race is the monsters and the alien is the victim. That is a fun twist and is pretty classic science fiction trope. But again, if you wanted some silliness then you will be very disappointed. 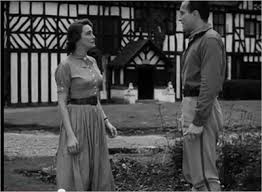 I thought the cast was good, though I didn’t recognize most of them. The big exception to that was Patricia Neal, an American actress who worked for decades and was great in almost everything that she was in. Most nerds like me will remember her from The Day the Earth Stood Still, which is basically the same story as we get here only with a much larger budget. That movie came out four years before this one so I’m wondering if there was a bit of marketing in getting her in this movie. Her performance is great, as is that of the entire cast, so I don’t really mind it.

I’ve already mentioned the special effects work. This is a movie that couldn’t have cost that much to make as it has just a couple locations for the duration. We also don’t get a lot of flying saucer action until the very end. This movie is about the characters and story. I think they did a very good job bringing that to the screen. The movie is only seventy-five minutes long and that seems perfect. If you are looking for some good science fiction that isn’t focused on a monster, then I can highly recommend Stranger from Venus to you.