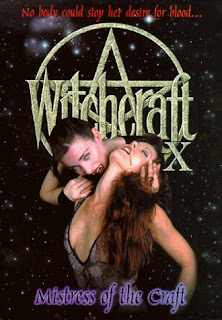 Why does this franchise keep doing this to me? If you remember part IX brought back the director who made the worst entry into the franchise, up until that point when he replaced himself. That was bad enough. But then I sit down to watch Witchcraft X and see that they moved the setting from Los Angeles to England bringing only one reoccurring character to a new story. Cool… but that character is Lutz, played by Stephanie Beaton, who was the worst actor in the previous movie. Damn it!

The story, if you can call it that, is repetitive from earlier flicks in the franchise. This time a vampire named Raven springs a cult leader named Hyde, who Lutz was coming to bring back to America to face charges. She does that so he can summon a demon or god that is even more powerful than Satan. Allied with Lutz is Celeste who is a witch, I think. She comes off as part Doctor Strange and part Buffy the Vampire Slayer. I’m making this sound much cooler than it really is. Stuff happens… slowly and then the bad guys get what is coming to them. The end.

The formula of nothing happening for long stretches with some nudity and naughty stuff mixed in is followed again. They made ten of these things so they must be catering to an audience somewhere. The plot is paper thin and is the same one that we get with most every Witchcraft movie. Bad guys want to summon a badder guy to do bad stuff. Heroes have to stop them. That’s it. We know that there isn’t a plot so let’s talk about what we do have to watch instead. The thrilling action here consists of people walking, talking on the phone, dancing to shitty music, footage of random people strolling around the street, and more dancing. Not fun at all.

Witchcraft X has a lot of fight scenes in it as Celeste does kung fu magic many times. If you thought they were bad at character and story you should check out the fight choreography. It is awkward and you can see where actors pause to wait for the very slow kicks and punches to come at them. The vampires have super strength which means that when these small women grab men and toss them across the room the victims are clearly jumping and throwing themselves along to help. Honestly, it’s just crap.

Some other familiar complaints at this point are the audio issues where you can’t always hear the dialogue from scene to scene and sometimes even from actor to actor in the same scene. The music is generic and at times the volume changes seemingly at random for no apparent reason. I also noticed for the first time that there are no musical cues in this flick at all. While they were bad in the past they at least were there. All in all, this movie feels cheaper than those that preceded it, which given the budget on those is saying something.

I’ve lost hope at this point. These Witchcraft movies are getting worse as they seem to recruit no talent directors, writers, and actors to work on them. I know that sounds mean but I’ve sat thru ten of these damn things at this point, so I feel like I have the right to be pissed off. I’m not asking for a classic but at least make an effort. Clearly, I don’t recommend Witchcraft X: Mistress of the Craft.

Next upWitchcraft XI: Sisters in Blood

Posted by Gutmunchers Lives at 3:07 PM