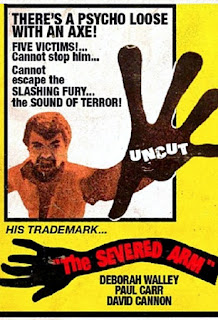 It should surprise no one who regularly visits this website that I’m a huge drive-in movie nerd. I love all the of cheesy fare that was shot for the passion pits of America. I’ve spent more than forty years tracking down and watching all of them that I could find. Yet somehow, I still stumble over hidden gems now and again. The Severed Arm is one of those.

The action starts with a mysterious figure breaking into a morgue and chopping off an arm of a corpse. We then see them wrap it up and drop it in the mail. As a side note we watch a mailman make the special delivery and if you look really close it is Angus Scrimm! The man who gets the arm is named Jeff and he seems very disturbed by its arrival. He makes a call and heads off to see his friend Ray, who is a doctor. I only say this because when he arrives the doc opens up his liquor cabinet. God the seventies were cool…

Back to the story. The pair say it must be Ted, who is a raving maniac. Why is he like that? In an extended flashback we see that six men all went cave diving and got trapped underground. In an effort to hold off starvation they draw lots and much to his dismay lop off Ted’s arm for supper. Though immediately after the deed is done rescuers arrive to save them. That was terrible timing. As a group, except for poor old Ted, they all agree to lie and say he lost his arm in the cave-in. Ted goes crazy and ends up in an institution. But now it appears he is back for revenge. Sure, enough the five men in the conspiracy start to die and lose their right arms. Who lives and who dies? Is it Ted who is killing them? You will need to watch this movie to find out.

I really do suggest that you guys check this one out. This is an excellent low budget movie that has an interesting story to tell and that keeps the action moving. The flashback works very well to setup what happens later. The dialogue is solid and the acting very good. There is some tension and a couple okay scares, which were appreciated. The cat and mouse game being played between the killer and his victims is also fun. I also like how well thought out the story is. They can’t go to the police without letting them in on what they did. Heck one of the men is a police detective! So they have to keep it secret and deal with the killer themselves, which I can let you know doesn’t go well. The Severed Arm is a well written movie.

There are many familiar faces, mostly from television, in the cast. Marvin Kaplan, Paul Carr, and Deborah Walley should all be recognized by fans. They do a great job in their roles bringing the characters to life. Again, the writing is a huge help, but casting veteran actors in the roles doesn’t hurt. Far too many independent movies are drug down with bad writing and/or acting. With The Severed Arm this is a strength.

For an early seventies’ movie, I was impressed with the level of gore. We see a few severed arms with lots of bright red blood on screen. There is more than once where the hatchet comes down again and again. While we don’t see it hit the editing is such that the attack feels violent and visceral. The body count is a bit light at only four, but the ending more than makes up for it. While not another kill it hints at a fate worse than death. This movie pulls no punches and I dig it for that.

This is why I keep searching thru the piles of “to watch” movies. Sure, a lot of them end up being miserable but I’d sit thru ten of those (and have!) to get to one gem like The Severed Arm. I highly recommend that you find yourself a copy of this right away. It is worth your time and money.

Posted by Gutmunchers Lives at 10:42 AM