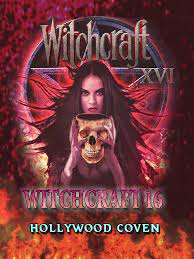 Okay so shit is going to get weird with this one. This is the third of the three movies that were shot together to make up fourteen, fifteen, and sixteen. As I would have expected this movie picks up right where the previous one ended. We see that Sharon the witch has hopped into another body and survived her killing. She kills the man she is passionately hugging and then the director yells cut. Wait… what the hell?

Things shift gears as we see that the actors from the movie are actually actors in a movie called Crystal Force XV. But the director suddenly announces that the reason that the franchise is so successful is that they sacrifice a cast member to ensure that the product is video rental gold. So he rips her heart out and then we see the actors from the previous movies at a table read for Crystal Force XVI. The actors are going by their character names but are playing different characters in the movie in the movie. Why? Because a coven is trying to activate a bunch of witches to take over Hollywood.

Hey, they tried something different. I appreciate that, though it is just as poorly written as the previous stories at least it isn’t a summoning. The dialogue is weird, the plot awkward, and they make no attempts to explain how it connects or why the actors in the Crystal Force movie have the names of the characters they played in the previous Witchcraft flicks. Also, this is obviously “inspired” by Wes Craven’s New Nightmare, so it isn’t all that creative. The worst part about the story is that they either didn’t have enough to fill out the entire runtime or didn’t know what to do with it. 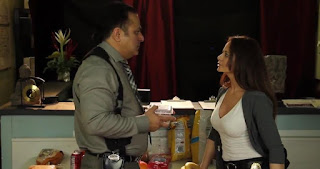 Yes, my friends Hollywood Coven is one of the worst in the franchise when it comes to padding. From the very beginning where the opening credits go on and on, so much so that they actually have to restart the theme song to cover it. They also decide to use tons of footage from the previous movies as our characters here are assigned the job of watching earlier Crystal Force flicks as research for the roles they are about to take on. That is an excuse for us to watch not one scene but two where the cast sits on a couch while they/we watch old footage from earlier Witchcraft entries. This is some Camp Blood level shit and of course I will point towards David Sterling, producer of this and Camp Blood. I would like to remind everyone that they shot three movies at the same time and had maybe enough material for one. Way to bleed horror fans wallets dude.

Behind the scenes the shitty filmmaking continues. The audio levels are squirrely again with them changing from scene to scene and sometimes within the same scene. The camera work is chaotic as the focus keeps adjusting as the cast walks thru the scene. They double down with a camera that won’t stay still. It moves all the time like some bad found footage movie. That is completely unnecessary and feels like they just didn’t want to block the scenes and have the actors hit marks. The CGI is as bad as it has been in previous Witchcraft movies and honestly given that these were made only five years ago is unjustified. You could have easily done better.

I could go on, but I’m done talking about this franchise. Out of sixteen movies I can’t recommend a single one. That obviously includes Hollywood Coven as well. How can someone keep making such bad movies over and over again? Who is funding these things? Who is buying these things? You all need to stop right now!

Next up… nothing! This shit is finally over!

Posted by Gutmunchers Lives at 2:21 PM