William W. Johnston is a new to me author that was recommended by a good friend. He is best known for cranking out western novels and was prolific at that. Though he also dabbled in some horror and post-apocalyptic stories as well. Since those are more my style, I thought that I’d give him a chance. Finding many of his books available on the Kindle store for a couple of bucks I thought that I’d jump off with Bats.

Our protagonist is Johnny, a former spy/soldier who has retired and moved to a small town in Louisiana. One morning he finds a dead cow and calls the cops. Because he is such a manly man, he instantly knows that something bad is about to happen. And since he is a bit of a prepper, he starts to lock down his already impenetrable fortress of a house getting ready for the shit to hit the fan. Among the first batch of scientists to come investigate is a vet lady named Blair who becomes his love interest. And there are giant killer vampire bats that actually not only drink blood but eat people! I guess that is important to mention.

This was an interesting book and much different from what I’m used to. I was never into those western novels that my grandfather used to read a ton of. I have read a few of them and this book feels a lot like those. The story is simple and gets right to the point with bat attacks and killings early on. The local authorities immediately get to the business of saving who they can while struggling with liberal judges, anti-police reporters, and tree hugging hippies that value the life of the bats more than people. Damn this shit got Fox News really fast! Just to be clear I’m a very conservative guy and in many ways enjoyed the scenes where the reporters whined about police overreach right before having their faces eaten off, but these characters are completely absurd.

Don’t get me wrong there are a lot of great things in the book. The attacks, and there are a lot of them, are described in perfectly gory fashion. Eyes are eaten, faces ripped off, and the author does a wonderful job of slowly laying out the strategy of the intelligent bats as they learn how and when to attack for best results. We are also introduced to some want to be Satanists who end up handling a bat and getting rabies, which again was a cool twist. Though I was eventually disappointed with it, more on that later. Even the preparations that Johnny makes to his house and his taunting of them was fun. There are some enjoyable bits here. 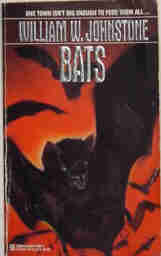 On the not so great side of things I was disappointed in the rabies subplot that was introduced. I thought we were going to have a I Drink Your Blood style bit of mayhem as they killed and infected as many people as possible on their rampage thru the nearby towns. But after a cool setup anything that does happen is mentioned by the characters or on a radio report from the police. There is one bit where the police gun down a few but it is there solely to have a reporter bitching about police brutality before being eaten by bats. So instead of a cool subplot we get another sixty or seventy pages of more bat attacks that play out like the others. This was a missed opportunity at doing something fun instead of padding the story out with more of the same.

I also thought it was weird that Johnny is portrayed as the man with all the answers. He makes leaps in logic and is never wrong. The moment he predicts something is going to happen it immediately does. I kind of like some flaws in my characters so they have some sort of story arc. It makes the plot that much more interesting. I guess this goes back to Johnny being the manly man who is going to fix everything. Though in an ironic twist he doesn’t. That brings me to the ending of Bats, which was annoying.

Johnston takes the first ninety five percent of the book setting up these super smart characters and having them try plan after plan to kill the bats. You would figure after trial and error they would have some satisfying revelation that would then defeat the threat and bring things to a decent conclusion. Nope… Spoilers ahead, you have been warned. Mother nature kills them off because the giant bats can’t be allowed to exist. Bunches of regular small bats all migrate to Louisiana and attack the big ones, who are completely afraid of them for reasons that aren’t ever explained. Ten pages of small bat attacks and the book is done. Not cool dude… not cool.

There were times that I was digging on Bats whole lot. And I was really looking forward to seeing how it all ended. Then I actually got there and was totally let down. Johnston is a good writer and his stuff flows nicely making for a good read, but I really did not like this story. While I can’t recommend Bats though I have a feeling I might like his other stuff a lot more, so I’ll be checking at least one more book from him. Obviously when that happens, I’ll post the review here and let you my loyal readers (hey there could be two of you!) know.