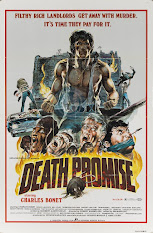 A voiceover tells us about the plight of the poor who are being screwed over by rich landlords all while a couple guys are out jogging. One of them is named Charley and he returns to his apartment to find that the power, water, and gas has been turned off. He hears a scuffle in the hallway and finds his father fighting with some men. Here we see that Charley is a badass karate dude and kicks their butts. Charley then goes to his dojo and practices his karate before kicking some more butt when the minions of the landlord try to release rats in the building. All of this is to drive the tenants out so they can tear the building down for some new construction to further line their pockets with cash.

When they can’t drive them out “legally” they decide to get a bit more violent. This leads to Charley’s Dad getting killed and in turn him going to China to learn better karate to come back and kill all those responsible. After some training montages he comes back and gets his revenge. See he made a death promise… see how that works in with the title? There is a final big twist at the end with the secret identity of the head bad guy being revealed and more karate happens.

This isn’t what I would call a good movie. The plot is very thin, and the movie plays out like this. Karate fight, training montage, some dialogue poorly delivered to move the plot along, more karate, and even more training rinse and repeat. It gets somewhat annoying after a while and I’ll admit that at times the movie drags a bit. But I have a soft spot for Death Promise as it checks off two big boxes for me. One is karate/Kungfu/martial arts which it has a lot of. Not only that but it is decent as the cast has some skills. Don’t expect Shaw Brothers awesome, but for an American low budget flick it was solid. And most importantly it was plentiful. This was a strength of the movie and the filmmakers lean heavily on it. That was a smart decision.

The other box it checks off is the setting of New York City. This is another fine example of guerilla filmmaking as they are clearly shooting on the streets of the city without permission. You can see people stopping and starring as the actors run down the street and fight in the park. Not only that the movie captures the streets, buildings, and stores of seventies New York City in a way that I really dig. I’ve said it before, and I don’t want to come off like a broken record but there is nothing quite like the city in seventies and early eighties. It is a character itself and brings a flavor to anything shot there in this style.

Until recently I hadn’t heard of Death Promise but I’m glad that I found it sitting in a stack of stuff I’ve been meaning to watch. Not sure where it came from and how I got it, but it makes me want to dig into the pile some more. Again, this isn’t a great movie but it scratched that itch for me and I think if you are in the right mood it will do the same for you. With that caveat I recommend Death Promise.

Posted by Gutmunchers Lives at 7:13 PM