This movie has been on my list to watch for years and somehow, I just never had a decent enough copy to watch. I’ve even been as close as having a disc in hand that ended up being defective. Finally, I got myself a functional copy. It is time to check out this Christopher Plummer and Karen Black flick! 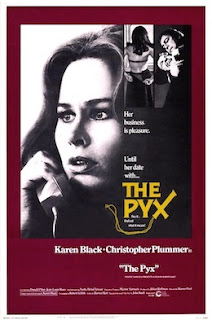 Plummer plays detective Henderson who is called to a crime scene. A woman has been killed and found lying on the ground next to an apartment building. Hey that body looks familiar… it’s Karen Black! I thought she was in this movie, guess not. Only she is because as we watch Henderson unravel her murder, we see her last couple of days in a series of flashbacks that tie into the suspects that the detective is interviewing.

Black is playing a working girl named Elizabeth Lucy. She is recruited by her madame to take the place of another girl who has disappeared. Though we find out that she hasn’t really disappeared, but that Elizabeth has helped her get into rehab to kick her drug habit. Hesitant at first, she is bullied into meeting the strange man and after an uncomfortable bit where he makes her strip and then asks her a bunch of personal questions, he finds her acceptable. To ensure she shows up for her appointment he has her followed by a thug. She shows up only to be drugged and brought to an altar. Seems they want to sacrifice her to Satan or maybe she is to be the Devil’s baby momma? Not sure but she comes to her senses and runs away, falling or jumping to her death.

By the time that we have seen this Henderson has figured out that there was a black mass and has tracked those down who were responsible for Elizabeth’s death. There is a shootout where the thug buys it and then the creepy guy gets to ramble a bit before getting what it is coming to him. Though his last words make you wonder if Henderson did him a favor.

The public ate these Devil worshipper movies up in the seventies. This one isn’t as well known but I really liked it. The cast is excellent with the highlights being Plummer and Black. Both are wonderful and carry their half of the movie perfectly. Oddly enough they never share a scene unless you count those where Black is laying on the ground or a slab playing dead. The story is about what I would expect from a police procedural with the big exception being the split storyline and jumping around in time. This could have been confusing, but they executed it very well.

If I do have one complaint it is that the pacing is just a bit off. While I was able to follow along there were times where the movie was dragging. They take time with supporting characters that could have probably been cut. There is a whole subplot with Elizabeth’s gay roommate and a road trip that they take to the house that she grew up in. This all could have been cut and it wouldn’t have hurt the story at all. Other than the pacing I don’t have any issues with The Pyx.

Some other things I wanted to mention. Karen Black did some singing on the soundtrack and it sounds cool with the music is leaning into the folksy music of the late sixties and early seventies but at least it isn’t disco! While not New York City seeing the seedier side of Montreal was fun. I don’t believe I’ve ever watched a movie shot there before. I also thought it was cool to see Plummer in a sort of hardboiled detective story like this. I’ve only ever seen him in horror and science fiction movies, so this was a neat change. Well, okay he was awesome in Knives Out, so I guess that is the second murder mystery I’ve seen him in. Though there he was the victim.

As I’ve already mentioned these movies were huge in the seventies. Everyone knows about the Exorcist and The Omen, but we also got the Devil’s Rain, Race with the Devil, and many others. The Pyx fits nicely in with that second tier and is one that I’m surprised took me so long to finally get around to. It is well worth the watch and I recommend it.

Posted by Gutmunchers Lives at 1:49 PM