There is nothing that I enjoy more than a good old fashioned monster movie. This looks to be just that with the added bonus of Lance Henriksen in a starring role. You heard that right it isn’t just stunt casting, but he has an actual damn role! Not only that he plays a grumpy grandpa doing battle with a terror from space. Damn movie you get me… 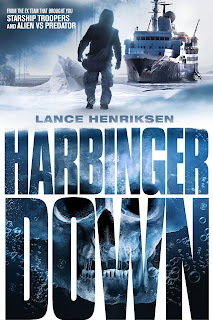 The movie opens in nineteen eighty-two with a Russian spacecraft crashing into the ice. We see that something was going horribly wrong, and I don’t mean just the crash. The action moves to present day with a group of science types led by a douchey professor with grad students in tow. One of those students is the granddaughter of the crab boat captain. They head out to check the migratory patterns of Beluga whales and how it is impacted by global warming. While poking around the granddaughter discovers the Russian space craft in the ice and they pull it onboard. At first the only argument is from the professor trying to claim the discovery as his.

I did say he is kind of a douche. But when the body of the cosmonaut disappears, and something starts picking them off one at a time ownership becomes less of an issue. There is a monster onboard that can change its shape and mutate/consume anyone it comes in contact with. We find out thru a twist which I won’t ruin that the Russians were experimenting on Water Bears aka. Tardigrades that can live in just about any environment. The critters mutated into a monster that is now stalking them. If that weren’t bad enough if you become infected by them, you eventually become part of the monster.

The rest of the movie is a familiar creature feature with the diminishing group of survivors trying to escape as well as destroy the monster. If it gets loose humanity is doomed. While Harbinger Down doesn’t break any new ground, it does execute the formula with relish. They quickly establish the creepy environment of the crab boat isolated in frigid waters. Everything feels dirty and wet so when they need to creep around the ship in the dark it works. The characters fit the archetypes that we are used to, but the actors do very well with what they are given making it feel fresh. Henriksen is the

highlight as the crusty captain and grandfather. He also has the best line in the movie. When they eventually come up with a weapon to freeze the monster, they load up the coolant in buckets. Finally tracking down the now much larger monster, it ate a few people and absorbed him, he drops “We’re gonna need a bigger bucket.” Normally I’m not the kind of guy that laughs at stuff like but they nailed it.

The special effects work is stellar and is all practical. The creature is amazing and has several different shapes as well as sizes. They even take the time to show at least one of the characters who was killed as part of the creature. There is a decent nine kills with some of the highlights being an arm frozen off, a mutating/exploding character, someone is grabbed and squished, and death by metal grade. They effectively get pulled thru it… ouch. Though my best is another character getting yanked into a tube that is clearly not large enough for the human body to squeeze thru!

Good creature, fun kills, old school actor given something to sink his teeth into. What isn’t to love here? Harbinger Down is a great throwback to the squishy monster movies of the eighties, and I dig it. I especially love the fact that they went out of their way to not use CGI. All of this makes the movie feel like it belongs to a time twenty-five years before it was made. I highly recommend this one.

Posted by Gutmunchers Lives at 4:19 PM