This title caught my eye when I saw some friends talking about it online. I knew right away that I had to see this. I mean dinosaurs in the old west… SIGN ME UP! I expected a cheesy low budget independent movie, which is exactly what I got. Though I didn’t expect to enjoy it so much. More on that later. 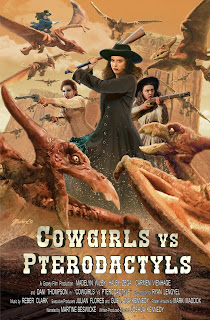 The action starts when a guy walks into a saloon with a bag full of something valuable. We know this because the man who is going to buy it from him is anxious to get his hands on it and says as much. Of course, being the old west there is a double cross and gunfight. Everyone in the room gets killed except for the saloon gals aka. “working girls” who make off with the loot. Then we are introduced to our main characters.

Bunny is an alcoholic gunfighter who has seen better days. She is the hero to the local schoolteacher Rebecca. We also meet Debbie the Madame who runs the bar where the bag was dropped. Finally, there is Doris, a hardened desperado who breaks out of jail when the Pterodactyls attack. They all go after the dinosaurs when one of them carries off Rebecca’s husband. Their plan is to return the eggs which were the treasure in the bag and get him back. Because negotiating with giant sky lizards always works.

This movie is a blast. Doing a western on a low budget isn’t easy, but they do their best. If you look closely, I’m sure you will find historical anachronisms. But how picky should we be about a movie that has cowgirls fighting dinosaurs? The locations are decent, and the costumes worked for me. I suppose if they were trying to do a serious movie, I might find a lot more fault. But they aren’t so I don’t. The cast is solid and is clearly having fun. I was especially surprised by how great the minor characters were portrayed. It’s not just the leads who do a good job. That was impressive.

My absolute favorite thing about this movie is the special effects work. The Pterodactyls are brought to the screen with a combination of stop motion and puppetry. They went old school on us. That means that this just doesn’t feel like a cheesy movie, but an old cheesy movie. Now this hits the sweet spot for me. I loved when the dinosaurs would grab people and then you would get the stop motion figure squirming around. Oh, and then there are the inserts with the puppets snapping at the cast. There isn’t anything quite as fun and it was nice to see someone do it again.

If you haven’t figured it out yet this movie is playing it for laughs. There is some great stuff here from how Debbie pays for the horses, Terry the baby Pterodactyl, and some funny one liners it all works for me. Toss in a nice reference to Thing from Another World with a pickaxe being tossed at a critter and some narration from the legendary Martine Bestwick for a movie that is worth spending some of your time on.

Posted by Gutmunchers Lives at 11:18 AM