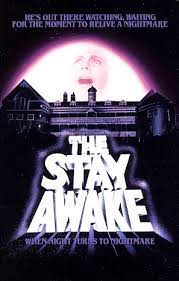 When I stumbled over this movie and read the description that it was a South African produced eighties slasher flick, I was very interested. I’m always looking for another movie to cover in my annual marathon, so I tracked down a copy and dove right in. Let me say this right up front, this is not a slasher movie. The only question left to answer is if this is worth a watch.

Our story starts with a prisoner named Big John Brown being hauled off to the gas chamber. Since we are given some distinctive fifties music being played, I’m guessing it is either that decade or the early sixties. As he is strapped down we get some inserts that let us know he was a murderer that killed women because he was the angel of darkness. Some Satanic thing I’m guessing. As he dies he swears that he is going to return to finish his work.

Years later we see a group of girls at a Catholic School doing a stay awake to raise money for their school. I’m not sure how that works, the movie never explains, but it means they are all going to be locked up in an old spooky building so that works for the plot. Thru the Evil Dead style camera work we see that something evil is lurking around. Yeah, it is the killer from earlier, though sometimes he is a rubber demon thing. It doesn’t make much sense. It zooms around and kills people, though not all you would think it would, and is eventually killed by high school science… or maybe not.

This is a terrible movie. First off, the story doesn’t make a lick of sense. How does this particular girl’s school get targeted by the ghost demon killer thing? Is there some connection to one of the girls? Was it built on an ancient Indian burial ground? Maybe one of the girls was playing with a Ouija board? See right there I gave three plot devices to explain this. That is three more than the movie ever gives us. I get that you are probably saying to yourselves right now, “But John this is a stupid horror movie.” You are right but even stupid horror movies need to make sense in whatever world they are trying to establish. 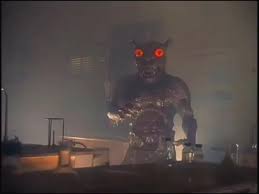 My next couple of observations have to do with expectations. This might sound creepy but being an eighties horror movie with a bunch of twenty something actresses it is expected that you get to see some skin. The filmmakers know this and tease us with a random shower scene that cuts away and returns with them fully dressed. At first, I thought my VHS copy must have been a cut for television version, but it wasn’t. I get that might sound a bit sleazy but honestly there is an established formula here and if they fail to deliver on it, I’m going to knock some “points” off.

Another expectation that I have with a movie like this is that there is at least an attempt at gore. The censors of the late eighties weren’t kind to genre movies. But it is clear that The Stay Awake never even attempts to put any effort into the kills. All them are offscreen. Let that sink in for a minute. We don’t get to see much of anything other than a heart getting tossed on the floor. There is zero gore at all in this movie. For fun there is a cheesy rubber monster that looks to be maybe four feet tall but that is all you get. Now I’ll admit I sort of liked the creature, but not enough to save the movie.

I should also mention the pacing, which is terrible. The movie lingers way too long on useless scenes and destroys any momentum that it might have built up. The acting is rough in spots, the soundtrack is bad, and the dialogue painful. I could go on, but do I need to? This is a bad movie that everyone should skip.