This is a strange one. I remember renting Body Melt back when the VHS first hit the stores and not liking it. It took me another twenty-five years before I revisited the movie on Blu-Ray (it was an impulse purchase at a convention). I wonder if this is going to be one of those flicks that I totally change my mind about. Might as well jump in and see. 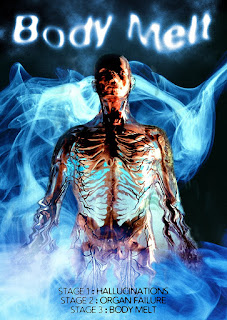 The story opens with a couple of naked people on a couch. The lady shoots some strange green liquid into the man. He then leaves and we hear her on the phone telling someone that he has been taken care of. We later find out that she, the man, and the person on the phone are all involved in a new vitamin supplement. The guy who is to be taken care of was a chemist who got cold feet and went off to warn the families at a planned community called Pebble Court that they are about to be used as guinea pigs. The company wants to see how the supplements effect people before rolling it out to the public.

We also get another plotline that is eventually connected to the story of the supplements where there is a family of hillbillies running a service station. A couple of guys show up and things go sideways. The family is a bit homicidal as well as being inbred. Back to the chemist. He makes it to the neighborhood but as he does his neck splits open and tentacles come waving out of the wound. That doesn’t seem too healthy to me. We get some explanation as to what is going on, the cops show up, and a lot more twisted body horror happens. That is about it for Body Melt.

This movie is what I’d call very trippy. At times it doesn’t make much sense, like the inbred family that some of the characters run into. Also, the effects on the people taking the supplement seems to be all over the place. One person grows a giant tongue, another chokes out a lady and dies during sex. We get a pregnant woman whose placenta goes homicidal before her stomach explodes. It is all over the place. Though I’ll give the movie credit that they do explain the differences later as unexpected glandular responses to their supplement. It is also revealed that the vitamins were sabotaged when someone removed the stabilizing agent from the lab. Guess who did that? Yep, they tie the patriarch of the inbred family in this way. It is all a bit much, but I appreciate a story that tries to make sense in the universe it has established. 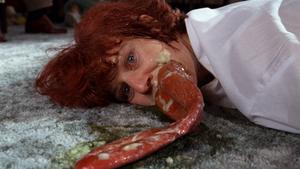 The gore is all practical, over the top and for the most part well done. The highlights are a melting head, death by snot, an exploding wang, and my favorite an obnoxious kid face plants while rollerblading. This and the other stuff were done in front of the camera with effects work that are proudly shown off on screen. Honestly, they should be happy with it as the kills are well staged, and the work very solidly done. Did I mention that this was an Australian flick? They really know how to do horror correctly down under.

I do have to knock some points off for how bonkers the movie is. It was hard to follow at times, but then they spread out the gleefully gooey bits that just about every time I started to get bored something amazing happened on screen. I like Body Melt and recommend it despite some of the flaws. I will not be waiting another twenty-five years to check it out again.

Posted by Gutmunchers Lives at 8:46 AM