Did I mention in my last review that there are eleven of these Camp Blood movies? Well, I’m back for more. The first movie didn’t thrill me but damn it I’m not a quitter. Let us see what this one has to offer. 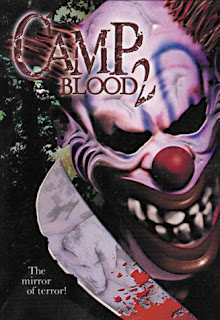 The movie starts off with a random couple walking in the woods. They meet up with the killer clown and are dispatched quickly. Then we get the credits and see a director talking to our only survivor from part one, Tricia, who is still locked up. He is trying to convince her to work on his movie to show her side of the story. If you don’t remember she was the only survivor of the first movie and by the time that one rolled the end credits she was locked up because everyone thought she killed her friends.

We then sit thru a casting call, a read thru, and general preproduction on the movie. I kid you not we get to see all this “thrilling” stuff onscreen! There are also a ton of flashbacks here, so we get to watch part of the original Camp Blood all over again. That is a reoccurring theme as they clearly used the earlier footage as flashbacks to reach the seventy-three-minute runtime. Eventually the clown does show up to kill off the cast and director before the big reveal… which is not at all possible. Let me explain.

The person in the clown costume throughout the movie is clearly a large man. The movie tries to convince us with the big reveal that it was a small woman who was maybe five foot six at most. She doesn’t even fit in the costume with it hanging so loosely off of her that they had to roll the sleeves up. There is also an issue with the story. She drops a bit of dialogue after the reveal that she hadn’t planned on killing anyone but Tricia, but after the first kill decided to kill everyone else as well. That first kill she is referring to is when she offs an actress that has already been cast in the movie so that they will call her in as a replacement. She is very specific about that. 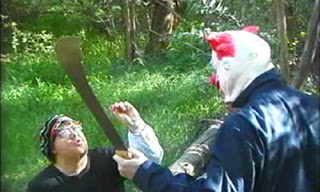 Quick question. Who killed the people before the credits rolled? It clearly couldn’t have been the same person who murdered all of the other characters because she hadn’t killed anyone yet. This was either lazy writing or they needed to pad out the movie to get it long enough to reach feature length. This is important if you are going to get onto store shelves. Add in the flashbacks that use footage from the earlier movie padding things out I’m leaning towards the latter. It is clear to me that they didn’t have enough story to make a feature.

We do get the typical boxes checked for a slasher movie. There is a shower scene and some nudity. The kills are also decent for the low budget. We get a hand hacked off, a machete thru the chest, some throat slashing, a broken bottle to the eyes, and another machete to the head. Though my favorite is when the killer jams the machete thru the mouth of one of the actresses. This is really well done, and the camera lingers on it.

The first Camp Blood movie looked decent for a shot on video production. But this one not so much. The audio is bad with a loud buzzing at parts. I’ve heard this on some other shot on video movies and I tried a couple different sources to see if it was my copy. It wasn’t or maybe they all have the same issue. There is also a weird green halo that I’ve seen in movies shot on some of the lower grade video cameras. All in all, there is a step back in quality to this sequel. Much like the first entry into the Camp Blood franchise I can’t recommend this.

Next up Camp Blood 3

Email ThisBlogThis!Share to TwitterShare to FacebookShare to Pinterest
Labels: '00s and beyond. The new stuff, Featured Creature Slashers, Genre - Horror