You know I said I was going to watch all of these and review them, but the last couple were so terrible that I almost bailed. Then again, a promise is a promise, so I sat down to watch Camp Blood 666. This movie was directed by Ted Moehring from a script by Monte Hunter based on a story by Moehring. This movie was surprisingly not awful. 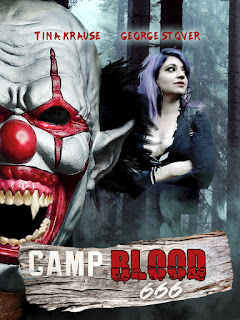 The fun kicks off with Satanists praying to the devil and sacrificing a girl at the altar in the hopes of resurrecting the killer clown. A light shoots out and illuminates one of them who immediately puts on the nearby mask and kills all of the other cultists. Later we see a naked girl posing in the woods for some pictures when the clown shows up and slaughters them.

Now we meet our main character Betsy who gets a call from her father. Seems that her brother was in the cult and he asks her to go find and bring him back. She recruits her boyfriend and together they head out to Camp Blood. Along the way they find a Park Ranger who warns them off and is promptly killed as soon as they are out of sight. They also find her brother’s diary and go looking for an ex-cult member who has no information for them but is promptly killed as soon as they are out of sight. This pair is cursed! Eventually the sheriff decides something is up and heads off to the woods with them in tow and is promptly killed. They find the killer clown and all hell breaks loose. There are a couple of twists and then it ends.

I’m not going to say that this is a good movie, but it is actually a movie. Instead of seventy minutes of nonsense and rehashed kills we get a narrative with characters who do things. If you haven’t read my earlier reviews of this franchise, then that might not make any sense but trust me this is a nice change. The past movies have always had a random person in the mask which is fine. But seven flicks in it was fun to see someone do something different. Here the killer is a possessed cult member with supernatural powers. I’m not sure what the eye lighting is but they use it a couple times and I liked it. I was never bored or looking at the clock which was very different from previous entries. 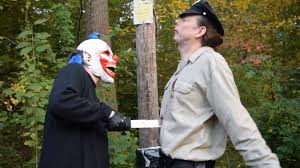 The kills are about what I would expect from a super low budget movie. They lean heavily on the stick a machete in offscreen and then cut to it being twisted as the victim spits up blood. It’s not great but at least this is practical. I don’t think that I saw a single bit of CGI in Camp Blood 666 and that was great! Some of the highlights is a tongue getting ripped out, a neck slash, and an arm getting chopped off when someone decides to get a picture with the killer clown. There are a lot of kills, sixteen in all, and they all seem to have had some thought put into them. I appreciate that a lot.

We also get some great one-liners, especially from one of the deputies as he runs away from the clown. The character names did get a bit annoying as this is another example of an independent filmmaker thinking it would be fun naming their characters Sheriff Carpenter, Deputy Meyers, Ranger Combs, etc. I get it you like horror flicks like the rest of us. The audio is also a bit uneven with different volume levels and wind noise. But they did ditch the obnoxious metal music of the last couple entries and went back to a proper soundtrack.

It took seven tries but I think that Camp Blood 666 might be the best one of the bunch. At least so far there are still four more for them that may screw up or do better. I don’t know that I can recommend this in general, but if you want to watch a Camp Blood flick this is certainly the one to watch and is an okay independent movie.

Next up Camp Blood 7: It Kills

Posted by Gutmunchers Lives at 10:37 AM