I’ve reviewed some other books by Shea for the website and when I saw this one and the description of giant lizards eating a small town in Florida I was sold. He did such a good job with the Loch Ness monster (review here) and the Orang Pendek (review here) that this went right to the top of my to read pile. Did it live up to my expectations? Time to find out.

The book takes place in a small town of Polo Springs located on the Gulf Coast of Florida. Things kick off with the talk of an oil spill and the following ecological disaster. Sometime later the residents of Polo Springs start to notice a lot of geckos running around town tearing up gardens and damaging the sidewalk. That doesn’t see like a big deal until their much larger kin start to show up. Think house sized lizards that not only accidentally kill the locals by stepping on them but also occasionally pop into the houses to snack on the inhabitants. Things get bloody pretty quickly and build up to a satisfying if rather abrupt ending.

In reviewing books as well as movies that deal with monsters, I tend to refer to the “formula” a lot. Jurassic Florida follow that formula to the letter. We are introduced to a community of characters while at the same time given some foreshadowing of what is to come. There is normally some mechanism used to isolate our potential victims, here a hurricane cutting them off from the outside world, keeping help from arriving. I know that some reviewers don’t like the feeling of a familiar pattern like that, but I love it. There are times when I want to sit down with a book and know what I’m getting into. When that happens all I’m concerned about is how well the formula is executed. 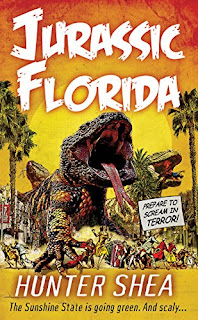 I’ve already mentioned that I’ve read a couple other books by the author and that I thought he did a good job with those. This one is no different. The narrative is tight and paced quickly. I was very pleased with the characters and while many fall into the typical archetypes, for example the dad protecting his son, we also get some fun twists. One of the people trying to survive is a homeless guy that is actually a low-level mobster hiding out in town. The mayor is normally someone who makes horrible decisions and makes things worse, but here Shea makes the character a teenage girl that is trying her best and eventually saves some people. These changes might not seem like a big deal, but it is different enough to be interesting while familiar at the same time.

One other thing that I wanted to mention is how well the author handles the gore. This is a book so there aren’t any limits on how the characters can die. Unlike a movie that is constrained with budget and what can be done with effects the author can be as twisted and vicious as they want to be. While Shea doesn’t go too crazy, we get some decent kills as people are squished, bisected, and eaten in all sorts of fun ways. I suppose it might just me being weird but when I sit down to read a tale about giant lizards, I want some mayhem and gore. Jurassic Florida delivers the goods and it made me quite happy. I highly recommend this one.

Posted by Gutmunchers Lives at 9:59 AM