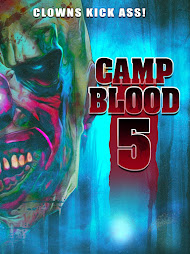 If you have stumbled over this review you might want to check my look at the Camp Blood Franchise by starting at the beginning with Camp Blood. Click here to start things off right.
The last movie ended with “To Be Continued” so I guess this is what they meant. We get a flashback to the end of the last movie and then get some very slow opening credits that are stretched even more than last time. Again, padding is going to be an issue here. Eventually we get back to our final girl, who is asleep in bed… wait what? I guess she survived offscreen somehow (they never do explain it). It is three months later, and everyone thinks that she killed the clown, and her mind won’t let her remember doing it, so she claims the real clown showed up.

She gets up and goes for another walk around town before stopping to do some shopping. Then has a discussion with her Mom and watches some movies after making plans for the following night with her friends. This watching movie bit is important because it gives writer/director Dustin Ferguson an excuse to show us the movies that our characters are watching. We see the greatest hits from Ferguson’s Meathook Massacre as well as those from the Things, also released by the same company.

After watching the movies our main character, named Raven, tells her friends that they need to go into the woods and kill the clown. Just in case you were wondering I didn’t just decide to use her name, but I finally noticed a note that they use in the movie has what I think is her name. This movie doesn’t have a lot of dialogue and I don’t remember them ever using her name. Regardless she and her two friends drive out to the woods and luckily the clown is right there and they can fight it out. This leads to a very dumb ending that I don’t care to explain.

I’ve mentioned in previous reviews of Camp Blood movies and this is especially true of Camp Blood 4, also from Dustin Ferguson, that they clearly didn’t have enough material for a feature length movie and padded things out. I did some number crunching and if you do the math, we have about forty minutes of footage from other movies. If you subtract the stretched opening and closing credits as well as the scenes of people walking around town, shopping, and staring at each other we have about eight minutes of movie left. They squeeze four kills and a bit of dialogue into eight minutes and then the final credits roll. That isn’t good.

Other things that I noticed in the few minutes of new material we get. The lighting is bad only this time instead of night shots being dark they manage to screw up daytime scenes as they shoot directly into the sunlight thus bleeding the color out. They did toss some early nudity in as the mom gets naked and takes a shower before work. The audio is bad and the levels on different actors in the scenes is uneven. Also, Ferguson decided to do what many low budget filmmakers do and blare terrible generic rock music at us instead of trying to match music to what is happening on screen. Since we have so much of the movie without dialogue that means there is a lot of this.

I really disliked Camp Blood 4 but I’ll be damned if they didn’t double down on all the crap that made that movie a dumpster fire. Stay far away from this one as well. Not only do I recommend not watching Camp Blood 5, but if you have a copy, I’d recommend tossing it in the trash. It’s that bad guys.