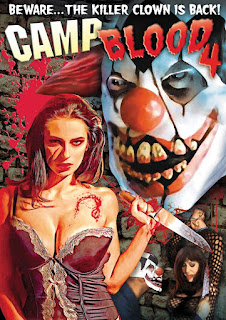 If you have stumbled over this review you might want to check my look at the Camp Blood Franchise by starting at the beginning with Camp Blood. Click here to start things off right.
Okay this is Camp Blood 4 though it is the fifth movie in the franchise. If you want to try and understand this read my previous review for Camp Blood First Slaughter. I don’t really want to try and explain it again. If you haven’t seen First Slaughter yet don’t worry you will hear all about it in this review.

The movie kicks off with a four minute long recap of what happened in the previous Camp Blood movie. Then we get opening credits that are painfully slow with names hovering onscreen far longer than need be. That kills another four minutes. Eight minutes in and we still haven’t met our new characters yet. We do finally meet our main character and watch her get out of bed. Then she brushes her teeth and hair and watches a news show that never ends. She finally shuts off the television and goes for a walk, stops in a store, and browses the shelves and then leaves for more walking. There is a good fifteen minutes of nothing but this without any dialogue or character interaction! What the hell am I watching?

Eventually we do meet the other characters and begin to get some dialogue, which makes me miss the silence that we had before. Though when people aren’t talking, we get some generic rock music blaring because that is what independent filmmakers like to do. There are more flashbacks as one of the characters tells the story of Camp Blood, which means we get to watch the kills from Camp Blood First Slaughter in another eight minutes of reused footage. With about thirty minutes left they finally get to the woods where we get more walking and talking. All the kills are in the last eighteen minutes and by then I didn’t care. Oh, and the movie doesn’t end because we get a “To Be Continued” on the screen.

I’ve seen movies that have a lot of padding, but Camp Blood 4 takes the cake. Seriously most of the seventy-three minutes is either flashbacks, walking, shopping, brushing, and other inane stuff that isn’t supposed to be in your movie. There is literally fifteen minutes of original material, and I use that term hesitantly. The killer and the kills are all lifted out of the previous movies and executed poorly. The mask looks terrible, we know who the killer is, and they use too much terrible CGI. These effects would have looked bad in the late nineties much less twenty years later.

This is just a horrible movie. It is certainly the biggest waste of time I’ve seen so far in the Camp Blood franchise and that is saying something. I’ve been watching and reviewing horror movies for over thirty years and this might be the worst excuse for a movie that I’ve ever seen. If you have read my stuff here at the website you know that I tend not to say things like this… but it’s that bad. I’m going to soldier on and check out Camp Blood 5 which I think is supposed to complete the “story” this one started. I don’t want to, but damn it I’ve started these movies and I need to finish them.

Let me suffering thru this nonsense mean something and please skip this movie. Hell skip this franchise all together. If you have already watched Camp Blood 4 then you have my sympathy and we have a shared experience, a horrible one.

Next up Camp Blood 5

Posted by Gutmunchers Lives at 10:17 AM