I used to say that there weren’t any good horror movies in the nineties. Then I started looking around and sure enough the decade was a heck of a lot better than I thought it was. The Relic is one of those that I had seen and enjoyed back then but had totally forgotten about. I haven’t watched it in ten or fifteen years, so I think it is about time for a revisit. 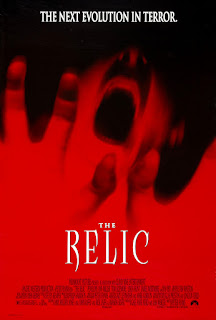 The action kicks off with a scientist named John Whitney photographing a native ceremony in the jungles of Brazil. The locals seem nice enough and even offer him the concoction they just created. He drinks it and is almost immediately scared by a guy in a costume. This seems to mean something to Whitney but doesn’t make much sense to the audience yet. Next, we see him desperately trying to get his crates unloaded from a ship that is setting sail for home. The captain informs him that isn’t possible, so he sneaks onboard. It is only then that we see that the crates weren’t loaded after all.

Six weeks later that ship is found drifting on Lake Michigan and is brought to Chicago. There is evidence of violence with blood smeared around, but the crew is missing. That is until they look in the bilge and find all their bodies. It is here that we are introduced to Lt. Vincent D’Agosta, played by Tom Sizemore, who is investigating the killings. A week later he is called again when another body shows up at the Museum of Natural History. Similarities between the killings on the boat and the body at the museum has D’Agosta connecting some dots and investigating the staff. This includes Margo Green, played by another nineties staple Penelope Ann Miller, a scientist working on DNA sequencing.

Eventually the characters realize that a monster is running loose killing people to eat their pituitary glands, which unfortunately means removing their heads. This also coincides with the big gala event where all the movers and shakers of high society show up for a fundraiser. Not only are people dying, but important people at that! Monster shenanigans happen, mysteries are solved, and science is done!

This movie is a blast. The story is based on a book from Douglas Preston and Lincoln Child, which I loved, and is a decent adaptation. Though it is ironic that The Relic (book) introduced their most famous character Agent Aloysius Pendergast who was cut out of The Relic (movie) in exchange for making D’Agosta the central figure. While that is disappointing, I do think that the screenwriters did capture the fun that was the monster running amok. And to be fair it wasn’t for a few years that the Pendergast character really took off.

The pacing is wonderful with the action slowing down long enough to dole out a few tidbits of plot or to creep the audience out. The setting of the Museum at night with the lights off is beautiful. The shadows and the way the exhibits look in the dark brings a ton of atmosphere. This helps set the stage for what happens later. This is a very atmospheric movie with a few scares tossed in here and there to spice things up.

In addition to Sizemore and Miller we also get some other familiar faces including Linda Hunt and James Whitmore. Heck there is even an appearance from Audra Lindley in her last movie role. You might not recognize her name but if you watched reruns in the eighties you have seen her. This is a wonderful cast that is given some decent material to work with. What else could you ask for? Well, I’m glad that you asked that.

The creature looks amazing and is brought to life with some latex and practical effects work. Now there is some CGI, but it looks decent. Well except for the very end when we see the creature running around on fire, that is sketchy. But for the most part the work is fantastic. That shouldn’t be a surprise considering it was done by one of my favorite monster makers Stan Winston. In addition to the great creature effects work there are some decent kills and other gory stuff. Multiple heads go flying and one unfortunate SWAT member gets split in half. Like the creature these are “helped” with some CGI, but it isn’t too bad. We do get tons of body parts after the fact that are handled with latex appliances and look amazing. The best scene is when D’Agosta visits the morgue to talk with the coroner.

Good cast, great story, and a fun creature. This is the perfect monster movie. I’m not sure why people, including myself, aren’t talking about The Relic more often. I feel like if this had come out in the eighties it would be considered a classic, but somehow the reputation of the nineties has hurt it. Regardless I highly recommend everyone check out the Relic. I won’t be waiting that long to watch it again.