Child is one half of my favorite writing team and while not as great as his collaborations with Douglas Preston his solo efforts are still superior to most else you will find in the modern techno thriller aisle at your local bookstore. When I saw a copy of his latest novel I had to pick it up and give it a try.

Jeremy Logan is headed to an isolated hotel in the Adirondacks to work on a book he has been writing but hasn’t finished yet. This is because while his day job has him working in academia he is best known as a world famous “enigmalogist” which I think means he goes looking for all sorts of inexplicable stuff and tries to solve the mystery. But again, he has come to work on his book and avoid distractions. When an old college friend who is also a park ranger shows up asking for help with some odd killings in the deep woods Logan is sucked into yet another mystery. This one finds him unraveling the secrets of both an insular clan of locals, some science types who may or may not be up to no good, all while ducking those who wish he would leave things alone. It all builds to a satisfying if not predictable ending. 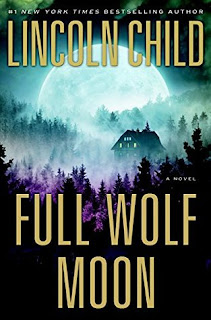 I enjoyed the heck out of this book. From the first page you are sucked right into the story with a hiker being killed. This sets up some foreshadowing as our main character, Logan, appears in the pages following looking forward to a nice quiet time focusing on his academic pursuits and finishing his book. Of course, we know that isn’t going to happen. Child then takes his time setting up the locations and the inhabitants painting a realistic world that is one hundred percent believable. This is important for later when things get weird. The pacing is brisk, and the characters are well fleshed out.

One of the best choices that Child makes in his books is to place odd supernatural events next to logical characters and scientific explanations. Here we have a story filled with skeptics who are forced to come to grip with the fact that they might be dealing with a werewolf! This conflict isn’t the focus of Full Wolf Moon, but it is referenced as everyone around Logan has to deal with what is happening. The character of Logan comes off a bit more willing to accept the creature, while looking all the time to try and fit it into a scientific explanation. This makes the story more realistic and a heck of a lot creepier than it would have otherwise been.

Child isn’t the kind of author that will relish or dwell on the gorier parts of the story. He does briefly describe severed heads and other nasty wounds. But unlike some of the other books I’ve reviewed here this is less about the creature and kills. Instead it focuses more on the mystery of who, what, where, and why. While it is different it can be just as much fun when done well. That is the case here and because of that I highly recommend Full Wolf Moon. I finished this book in two sittings one of which included a night where I stayed up way too late unable to put it down.

Posted by Gutmunchers Lives at 10:23 AM