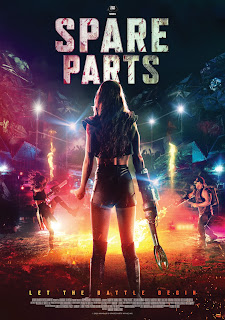 When I saw the trailer for this one hit the internet I was interested immediately. It looked like some sort of girl band gladiator battle flick. Not sure how that was supposed to work, but it sounded cool. Then I got a copy and it sat collecting dust for a couple of months. I totally forgot that I had it. This is one of the many hazards of getting old! Clearly, I found the movie and now am ready to talk some Spare Parts. Our main characters are in an all-girl punk band called Ms. 45. It is never a good idea when a movie starts off referencing an all-time classic exploitation flick like that. But okay I’m still willing to give them a chance. They are playing a biker bar and a fight breaks out where they kick some ass before the owner breaks things up. While selling merch in the parking lot they meet up with a douchebag in a corvette who later almost runs them off the road. When they give chase, they hit a spike strip and pop all their tires.

This leads them to a scrap yard to get the van fixed but instead are kidnapped by a cult. They are gassed and one of them groggily wakes up to see that their right hands are being amputated and the flesh removed from their lower arms to expose the bones. We eventually find out that they are being prepared to be gladiators in the games that the cult holds to appease the gods. The bones are there to serve as attachments for various weapons. Quickly adapting to their new lives and the mutilation that was done to them the women fight each battle that comes until they finally are able to get some payback. That shouldn’t be a spoiler for anyone who has ever watched a movie like Spare Parts. 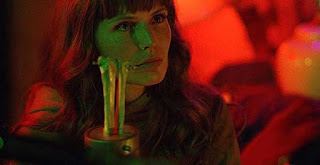 People really went crazy over this trailer and again when I saw it, I was into it. I was hoping for an interesting over the top gorefest with maybe some exploitive body horror tossed in. I sort of got that. Very early on we are treated to the girls losing their hands and the flesh being peeled off of their lower arms. That is some messed up shit right there and I was ready for some trauma when they woke up. They wake up and look down at the bones sticking out of their stumps and are like… “damn”. These are musicians who I’m thinking are likely screwed now. The movie had set up a great stomach-churning emotional kick in the ass and glosses over it. That was a bummer and I had hoped for more. I get that this is maybe not that kind of movie, but still guys you had it all setup for you. At least toss us a bone, pun intended.

This is a bloody movie with lots of gore. Throats are cut, a head gets smashed, there is an axe to the back, a head gets cut off, and there is a chainsaw to the chest. My favorites are a pair of face removals one with a motorcycle wheel and another with a chainsaw. These are shown in their gooey goodness on screen. Most of the bloody stuff is practical work with an occasional CGI assist here and there. Gore hounds will be very happy with Spare Parts. I’ve not event mentioned all the kills. There are a lot of them. Hell, the movie opens with a woman collecting spare body parts in a wheelbarrow. You find out later why, but I won’t spoil it here. 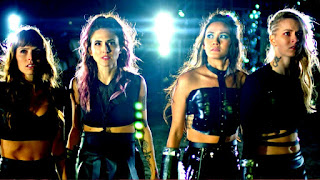 Normally the first thing that I talk about in my reviews is the plot. Here the plot isn’t that important. It serves to bridge one fight or training montage to the next. It boils down to cult kidnaps band, mutilates them, they get payback. It’s that straightforward. I appreciate a movie that keeps things simple, but I will admit that it does get a bit repetitive and slow as we see the same predictable stuff again and again. This is where them at least discussing their amputated limbs or the baby… damn I forgot all about the baby in the jar! Yeah, there are things that could have been expanded easily to add a bit more juice to the story.

I had high hopes for Body Parts. Could this be the next cult classic that I had to make all of my friends watch? It’s not, in case you were wondering. I do think that it is decent and if you are looking for gore with very little plot to get in the way then this is the movie for you.