The Flight that Disappeared (1961)


I feel like I’ve lost touch with my roots a bit here at the website. I’ve always been a lover of fifties and sixties science fiction and horror flicks but haven’t reviewed many of them recently. I thought it was time to correct that and when I saw this new to me movie show up on YouTube, I figured it might be a good time. It was… sort of. 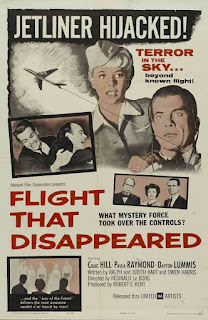 We meet our characters as they board a nonstop flight from Los Angeles to Washington D.C. On the plan are Paul Endicott, Marcia Paxton, and Dr. Carl Morris. Morris has created a new type of super bomb with the help of Paxton’s mathematical equations. Endicott has designed a rocket that could be used to deliver the new superbomb. They have all been summoned to Washington for a meeting to discuss the project. Along the way their plane starts to rise uncontrollably until it far exceeds the altitude at which it could operate. Everyone passes out except these three who are pulled off the plane to be judged by the future.

The idea is that the potential of the bomb they might build could wipe out humanity and therefore they are being judged by the people who may never exist in a place that exists outside time. They are found guilty but are given a reprieve at the last minute when one of the future people pleads for them. See the future has no right to stop the present… or something like that.

When most people sit down to watch a science fiction movie, they want monsters, aliens, and lasers going pew pew pew across the screen. I’m right there with you. But I also enjoy the more cerebral stuff occasionally as well. The Flight that Disappeared is one of those. Even before we meet the future people there is the character of Mr. Cooper who initially I thought was a nervous wreck because of the airplane and flying. He has gotten out of the hospital and is a bit unhinged. When he realizes that Morris is on the plane, he needs to speak to him. Surprisingly, he isn’t disturbed by the creation of the bomb but because he wants us to strike first before the enemy can get one of their own. The early sixties was right about the time that movies and popular entertainment started dealing with the futility of nuclear war so that was a neat twist to see. 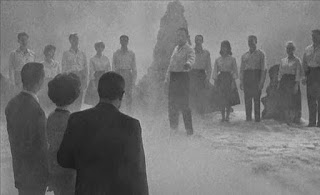 The movie is very talky and has little action. In fact, there is no action. This is more of a morality play in which characters are judged and start to question if they should build bigger weapons. Early on Endicott even says, “If I don’t build it someone else will.” Which is a common theme to many weapon designers over the years. That discussion has always fascinated me. I mean what if everyone said no?

I’m not sure if it is nostalgia as I’m a member of the last generation that grew up with the threat of the world ending any day due to someone pushing “the button” but I rather liked this movie. Though I will readily admit I doubt it has any re-watch value I think it is worth checking out at least once. Especially since it is available for free.

Posted by Gutmunchers Lives at 8:25 PM